Whenever I visited Norwich Castle Museum I always made a point of seeing John Sell Cotman’s ‘The Marl Pit’ in the section devoted to the Norwich School, but for several years it has been missing. After enquiring about its whereabouts I was given an appointment to see it in storage at the adjacent Shirehall Study Centre. Watercolour is a fugitive medium so nowadays The Marl Pit is only exhibited in the (dimmed) light of day for three months at a time.

Cotman employed a limited palette with typical ‘Cotman Blue’ skies. His watercolours were composed of patches of colour built up in layers by placing different values of the same hue, one on top of the other, once the underpainting was quite dry. These textured blocks of colour were simplified, with little detail to mar the effect and it is perhaps this geometry, this massing of interlocking shapes that appeals to the modern eye. Cotman introduced drama by juxtaposing darks and lights and carefully controlling the edges.

He often used animals to provide scale as well as counterpoints of light against dark (and vice versa) as seen here where the cows are outlined against the cloud.  The sheep, almost a reflection of the cows above, are about the same size but are drawn towards the viewer by dabs of red.

The power of red crops up later in the well-known spat between Turner and Constable. On varnishing day of the Royal Academy’s 1832 Exhibition Turner came in and surveyed his own seascape. He quickly transformed it by painting a buoy with a dab of red then departed, leaving Constable to say,”He has been here and fired a gun”.

When driving across the Carrow Bridge I often look up Carrow Hill to see the Black Tower on the medieval city walls, so strongly reminiscent of the dark rectangle on top of the cliff in Cotman’s Marl Pit.

Updated 6/9/2019: The Marlpit at Whitlingham appears to have been well known to Norwich painters and may be a better candidate. Below is an 1882 painting of Whitlingham Church, Norwich 1822 by Joseph Clover (NWHCM: 1939.141.9). In addition, the Castle Museum holds another painting of ‘Marl Pit at Whitlingham’ , which is attributed to JS Cotman (NWHCM: 1951.235.214) although stylistically is quite unlike the more famous ‘Marl Pit’ above.

The early Cotman is illustrated by the painting below of the Greta Bridge made during his travels to Yorkshire: superb draughtsmanship, crisp boundaries between carefully regulated areas of wash, suppression of inessential detail, with controlled blocks of darker colour leading the eye around the picture. The way that the man-made objects (house and bridge) are outlined by darker negative shapes shows Cotman’s control of edges.

Cotman was not restricted to the placid rural idyll as this dramatic late  painting of Yarmouth beach illustrates. His colours are now denser and objects are less ‘blocky’, less clearly separated, as he literally begins to push the boundaries between them. As any amateur watercolourist knows you take your life into your hands when ‘going back in’ to a watercolour painting; but the addition of a medium like gum arabic (some say a paste made from wheat or even rice flour) seems to have allowed him to manipulate the still-wet paint with a rag or dry brush as can be seen at the right-hand edge of the dark and threatening cloud.

Cotman’s experimentalism reveals itself in the painting of a Woodland Stream. Working on a surface briskly covered with probably no more than two colours he seems to have moved the surface by rubbing it with a rag, as can seen from the swirling marks in the foliage to the right. Form is given to the trees and reeds by ‘lifting out’; water applied with a fine brush is blotted to leave highlights. The freedom of this painting contrasts with the tight control displayed in Greta Bridge.

Below, another densely-pigmented watercolour from the 1830s shows the darker side of the Romantic vision. Again, the boundaries are more fluid, the wet blue paint ragged to produce a deliberately fictional sky.

The painting is low key, blue dominates, the whole effect sufficiently sombre to anticipate the Isle of the Dead by the Swiss Symbolist painter, Arnold Böcklin …

Since the Greta Bridge period, Cotman had been criticised for his depiction of trees in both oil and watercolour. As a sensitive – probably depressive – man he was disturbed by this for as the picture below shows, he had made numerous studies of trees and foliage. To the modern eye it is hard to see how his contemporaries could have taken exception to Cotman’s rendering of trees yet the critic of The Norwich Mercury could write:

“… we regret to find that it [‘Trees at Kimberley’] is in this instance as unintelligible to the virtuosi as to the public. We were wholly unable to catch the effect” [1].

About ten years ago, in an antique fair in Southwold, I came across an engraving by the Suffolk artist Leonard Russell Squirrell (1893-1979). I had not heard of this artist previously and muttered to my wife that his trees looked like Cotman’s. In one of those rare moments of theatre (in fact, the only moment of theatre) at an antique fair the dealer reached beneath the counter and showed me a book that suggested these two artists might somehow be connected. 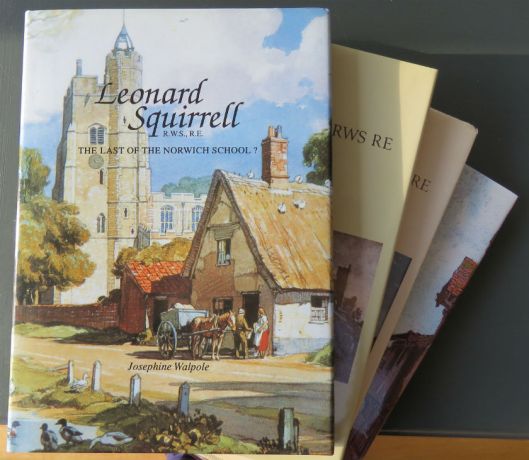 Leonard Squirrell: the Last of the Norwich School, by Josephine Walpole [1]

In her book  Josephine Walpole suggests that Squirrell continued the tradition of the Norwich School. Like Cotman, Leonard Squirrell was an excellent draughtsman. He  painted mainly East Anglian scenes in oil or watercolour but he was also a virtuoso etcher and engraver. The ‘Cotmanesque’ picture I had seen was a dry point engraving in which the image was scratched directly onto the copper plate with a needle.

In contrast to the inevitably linear effect of dry point engraving Squirrell also made masterful aquatints – a medium that lends itself to the massing of tones  [2]. Using this technique the copper plate is covered with a granular resin that gives a softer texture to the acid-etched surface. The resulting dramatic tonal effects can be seen in this print of Wymondham Abbey Church. 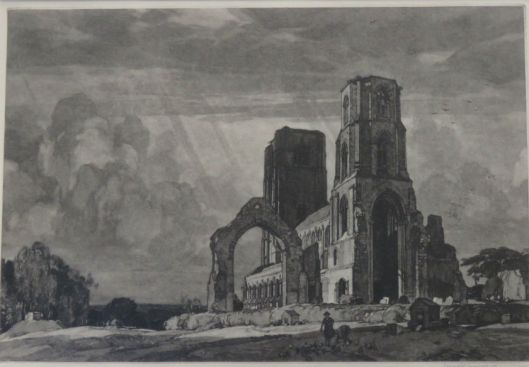 But perhaps the most striking effect is produced in the mezzotint. In this technique the polished copper plate is laboriously prepared by being ‘rocked’ all over with a toothed tool. The burred, ink-retaining surface is then scraped away to various degrees to produce lighter areas that retain less ink. As Leonard Squirrell said, “The characteristic quality of the mezzotint is the richness of the dark areas and the soft edges of the toned spaces“[2]. 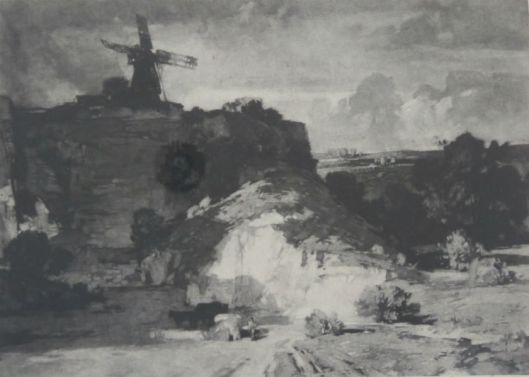 With the mill at the top and the lightly-shaded animals below, thrown into relief against the dark wagon, Squirrell – who had a deep knowledge of Cotman’s work – would certainly have been mindful of ‘The Marlpit’.

I am grateful to Rosy Gray of the Norfolk Museums Service, Shirehall, Norwich for kindly arranging for me to see Cotman’s ‘The Marlpit’.