Angels aren’t as common as they used to be. Five hundred years ago, before the Reformation, church was where most people would see artistic representations. The subject matter was strictly religious with angels playing important parts. Angels were ubiquitous and could be seen painted on rood screens, or as wooden roof angels, on wall paintings, painted glass and carved in stone. The way that angels were represented in these religious contexts may, however, have borrowed something from less strictly religious mystery plays.

In medieval mystery plays the angels would wear – in addition to wings – feathers that covered the body, ending neatly at neck and ankle. These costumes are variously described as ‘feather tights'[1] or feather-covered ‘pyjama suits’[2]. The roof angel below is covered with only few ‘feathers’ but this probably reflects the case that such body suits may have been covered with scale-like flaps of cloth or leather to represent feathers [1]. The feather suits worn by actors would have provided a model for the depiction of angels in church art, and vice versa. 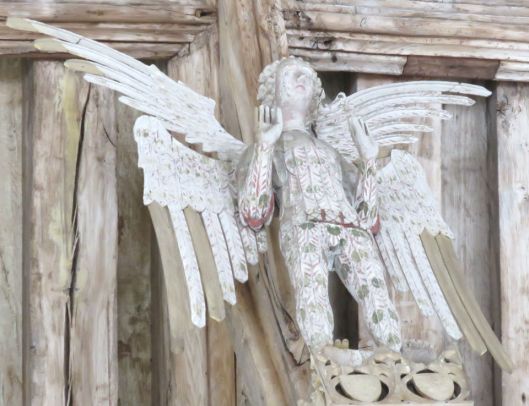 Roof angel, St Agnes Cawston, Norfolk, adorned in relatively few large flaps painted as feathers. The Cawston angels are unique in standing upright on the hammer beams. Charles Rennie Mackintosh was fascinated by them (below).

In the early C13th, Pope Innocent III became so concerned about the growing popularity of clergy in these mystery plays that he banned them from appearing. The dramas were taken over by town guilds who courted popularity by dispensing with Latin and adding comic scenes [3]. Such performances were known to have taken place at York, Coventry and Norwich. From Norwich, one play survived: this was performed by the Grocer’s Guild and named Paradyse [3] or The Fall of Adam and Eve [4]. The text of the Norwich Stonemasons’ play, ‘Cain and Abel’ is lost [4]. The Norwich guilds are likely to have mounted their parts of the cycle in a pageant, which involved elaborate ‘pageant wagons’ [2], staged on the early summer feast of Corpus Christi [5]. This C19th engraving of the Coventry mystery pageant gives an idea of what such events looked like.

There were nine orders of angels, ranked in order of importance [6]. Chief were the seraphim, with three pairs of wings (often depicted in red): one pair for shielding their eyes  from God, one pair for flying and the third pair for covering their feet in respect. However, some say the latter were for covering their genitals, representing base instincts, and this is how they can appear in medieval images.

Cherubim had four wings, usually depicted in blue. Then, after Thrones, Dominions, Virtues, Powers and Principalities we come to the more familiar Archangels who transmitted messages from God as Gabriel is doing in the first image above. Last were Angels – intermediaries between heaven and earth. Clarence was James Stewart’s guardian angel in “It’s a Wonderful Life”.

Some of the most beautiful medieval images of feathered angels in the country can be seen in Norfolk’s rood screens. Two stunning examples are at Ranworth and Barton Turf. Below, one of the Archangels, the “debonair and fantastical” [7] Michael, slays a many-headed dragon. The dragon probably represents Satan, who – according to Milton in Paradise Lost – was wounded by Michael in personal combat [6A].

While most of the 12 screen panels in Ranworth represent saints, the equally beautiful rood screen at Barton Turf offers a rare depiction of The  Angel Hierarchy. The painting can be dated to the late C15th based on the detailing on the armour [7].

Cherubim (left) have gold feathers, two pairs of wings and are typically covered with eyes. To the right is one of the Principalities. At St Michael and All Angels, Barton Turf, Norfolk 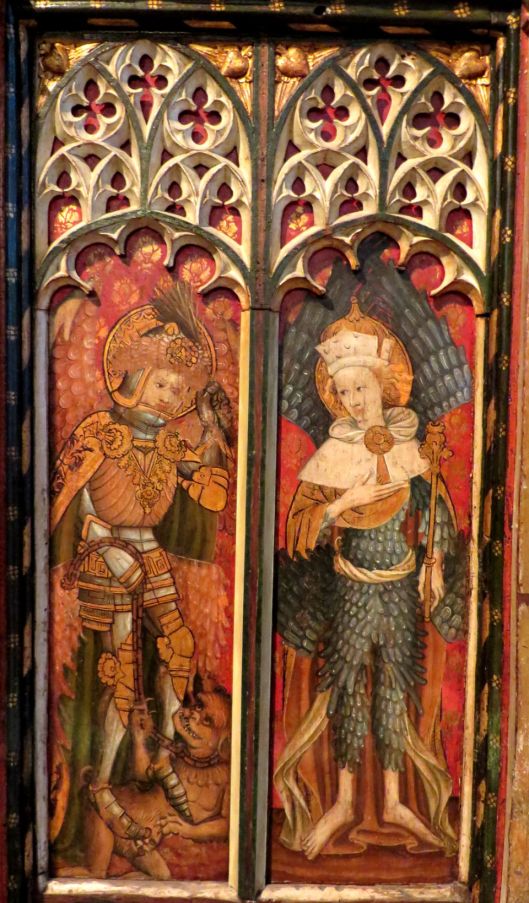 Left, Archangel Raphael – the leader of the Powers (usually depicted in their armour) – with a chained demon beneath his foot. The face on the devil’s belly denotes  base appetites. Right, one of the Virtues. 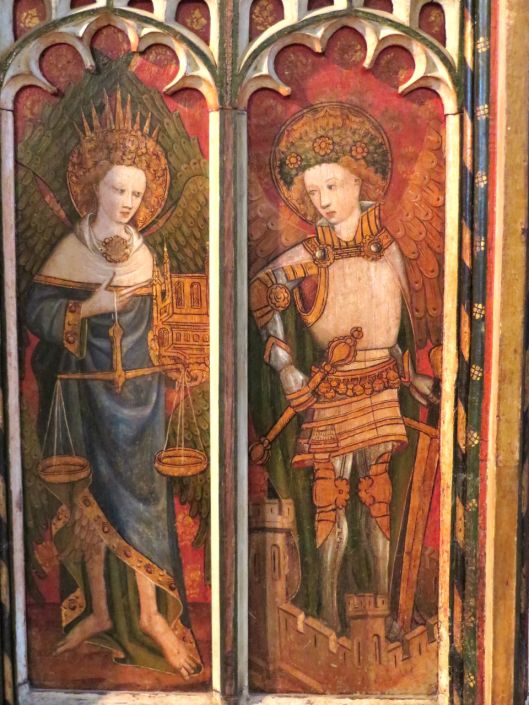 During the Reformation then the Civil War the iconoclasts, who were most active in East Anglia, destroyed countless idolatrous and superstitious images so it is surprising that so much of the Barton Turf masterpiece survives intact. Only two of the panels were defaced. 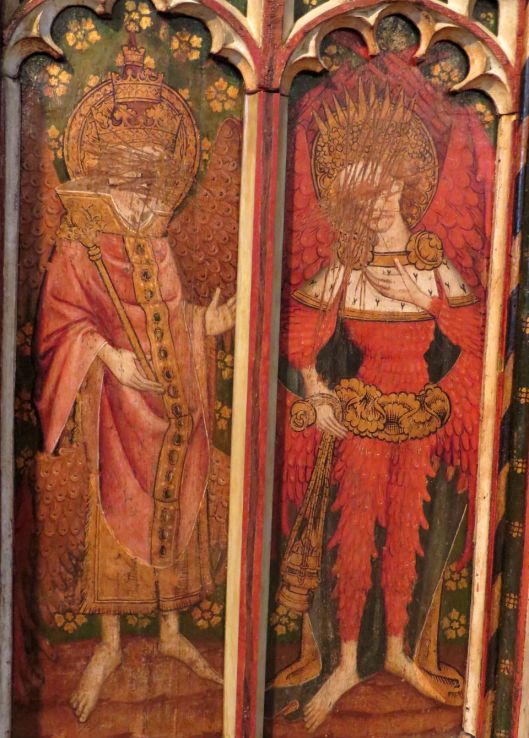 The Dominion (left) and Seraphim (right) were probably defaced because of their papist tiara and incense-containing censer, respectively.

Curiously, the feathered angels swinging censers in the spandrels of the west doorway at Salle [8]– less than 20 miles from Barton Turf – were untouched by the iconoclasts.

Angels were commonly depicted playing musical instruments. A favourite is this beautiful painting of an angel playing a harp at All Saints East Barsham. The glass was probably painted in the latter part of the C15th by the Norwich workshop of John Wighton [9] (see my first blog post on Norfolk’s Stained Glass Angels). 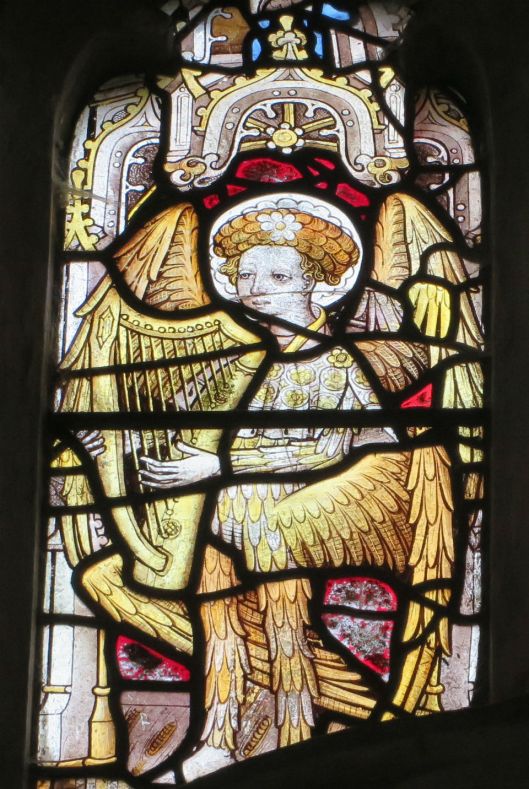 The harpist wears a fashionable turban. The ‘ears of barley’ at the bottom are typical of the Norwich School’s way of depicting wood grain.

Another harp player at St Peter and St Paul, Salle. 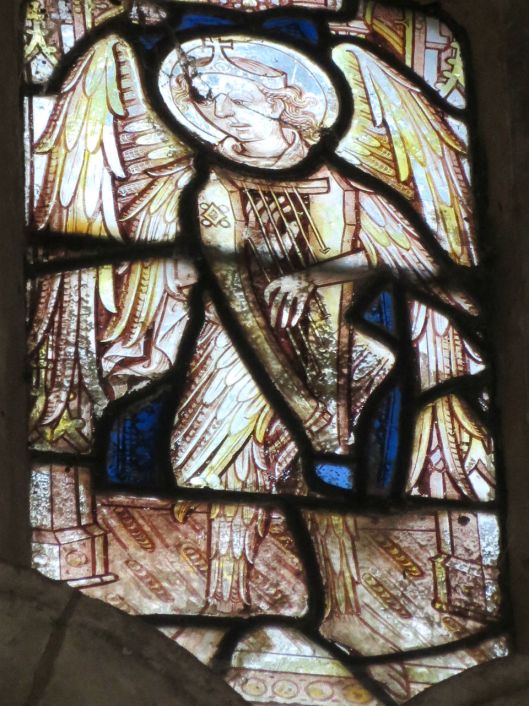 At St Mary’s North Tuddenham this angel plays the lute… 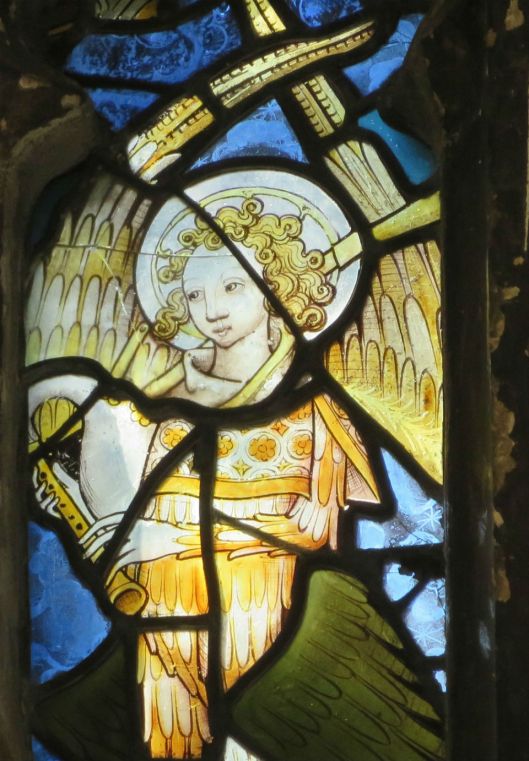 One of the glories of East Anglia is the large number of angel roofs, 84% of which are found in this region [13]. David Rimmer has examined two explanations for this. The first focuses on the Lollard heresy. (The name derives from their mumbling at prayer [from Middle Dutch lollaert = mutter]). Lollards were followers of John Wycliffe who – over a hundred years before the Protestant Reformation – objected to the pomp, imagery and idolatry of the Catholic Church. Their first martyr, who was burnt at the stake in London 1401, had been priest at St Margaret’s King’s Lynn. Lynn’s church of St Nicholas was the site of East Anglia’s first angel roof (1405-9) [13] suggesting that the large number of angels in East Anglia could be a counterblast to the Lollardism that was rife throughout this region.  In Norwich, men and women were burnt in Lollards Pit, a chalk pit once used for digging the foundations of the cathedral.

Another hypothesis involves the Royal Carpenter Hugh Herland who had created the first angel roof at Westminster Hall in 1398. Herland and his craftsmen came to make the new harbour at Great Yarmouth and it is argued that his influence spread throughout the region (although the first datable angel roof was in Kings Lynn [then Bishops Lynn] rather than Great Yarmouth). 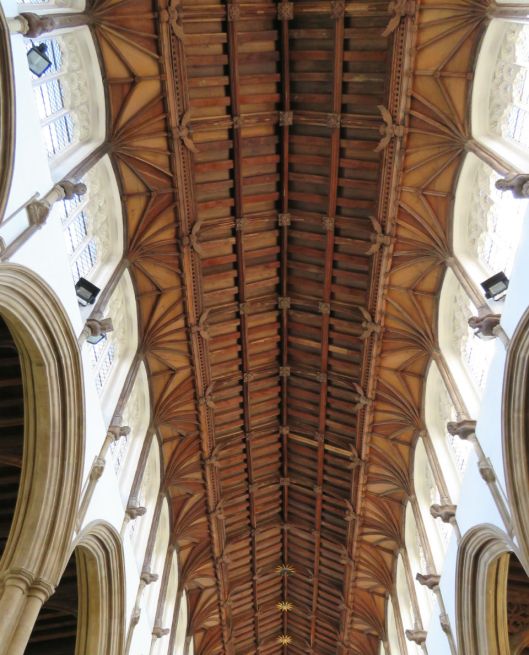 Cawston, north of Norwich, has one of the finest angel roofs. As well as the demi-angels with spread wings, forming a frieze around the wall plate, man-size angels stand vertically at the ends of each hammer beam as if ready to dive.

Thrust from the heavy roof tends to splay the walls outwards. Opposite walls can be held together by tie braces that span the width of the church but in hammerbeam roofs, the force is deflected downwards onto the jutting hammerbeams beams that only project partway into the volume. Cawston has a single row of these hammerbeams. Below, Knapton has double hammerbeams, allowing an ‘amazing’ span of 70 feet [7]. Double-deckered angels at the ends of these beams, together with two rows on the wall plate, result in a total of 138 angels.

The roof was added to C14th Knapton church in 1503. This probably dates the earliest angels [7] although some clearly derive from later restorations – the lower rank from the 1930s [10]. 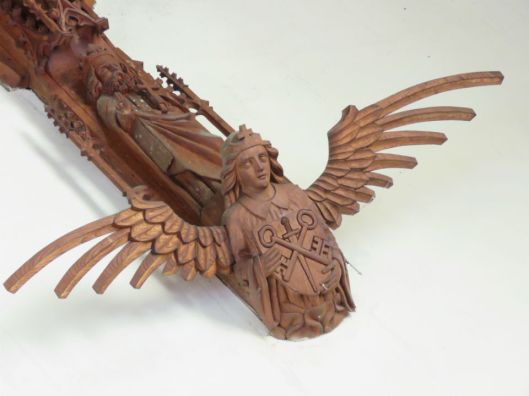 One of the lower Knapton angels, dating from the restoration of the 1930s Charles Rennie Mackintosh is associated with East Anglia by the pencil and watercolour drawings he made when he and wife Margaret stayed in Walberswick, Suffolk, in 1914. But he had previously visited Knapton, Norfolk, in 1896/7.

According to the Hunterian Gallery’s archive in Glasgow, Mackintosh had toured Norfolk with fellow architects Alfred(?) Greig and John Stewart, ‘possibly’ in 1896.  This is Greig’s sketch of a Cawston angel standing at the end of a hammerbeam.

Booton St Michael was enthusiastically but eccentrically revived in Victorian Gothic Revival style by Reverend Whitwell Elwin, a local man who claimed to be a descendant of the North American Indian princess Pocahontas [12]. Completed in 1891, his updating of the medieval church gets a mixed reception from various commentators: Simon Jenkins thought the interior was “blighted by the customary Victorian frigidity” although architect Edwin Lutyens concluded it was “very naughty but built in the right spirit” [12]. But Lutyens had a vested interest since he married one of the ‘Blessed Girls’ – the seemingly numerous young beauties whose portraits appear in the tracery glass [12, 13].

Most agree that the stained glass and roof angels made up for other misjudgements. The local master carpenter James Minns carved this hovering roof angel at Booton [13].

Left to the end: how Jeremiah James Colman made his money [15]

Just as I was finishing this article, Costessey resident Peter Mann responded to a previous blog article on Gunton’s brickworks by naming all the workers (below) at the Costessey brickyard.  Excitingly, he identified the arrowed figure as James Minns with John Minns seated on his right. Both were labelled as “Carvers of Norwich”, consistent with census returns giving their occupations as ‘carver’ (or, once for James, ‘sculptor’).  The entry for Minns [16] on the Mapping of Sculpture website gives his full name as James Benjamin Shingles Minns (ca 1828-1904). James was sufficiently confident of his skill to submit (successfully) a carved wooden panel of ‘A Happy Family’ to the 1897 Summer Exhibition of the Royal Academy; he had also carved the mantelpiece and panelling for Thomas Jeckyll’s commission for the Old Library at Carrow Abbey (1860-1) [17]. The presence of this highly skilled sculptor and his son at the Costessey Brickyard strongly suggests that they carved the moulds for the ornate ‘fancy’ bricks and panels for which Guntons were locally renowned. From his independent status as ‘Carver’ it seems possible that “James Minns of Heigham” [17] might have been freelance rather than a full-time employee, especially since his address was ca. five miles away from the Costessey Brickyard.

Norwich is a small city and its many lines of history are interwoven. A previous blog focused on the Boileau Memorial Fountain once sited at the junction of Newmarket and Ipswich Roads. James Minns collaborated again with architect Thomas Jeckyll by carving this coat of arms in the tympanum of the fountain [17]. 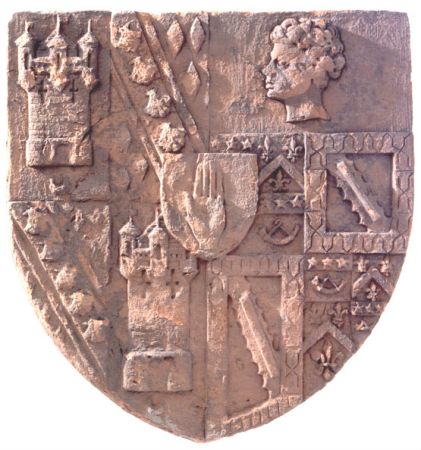 Back at Booton and another angel – the statue of St Michael above the porch … Richard Cocke [18] has suggested that Minns could have sculpted the model for Archangel Michael.

Church of St Michael Booton. A rather stern St Michael sheaths his sword, with a bemused Jabberwockian dragon at his feet. Attributed to sculptor James Minns.

Thanks to Peter Mann for identifying James Minns; Brian Gage for giving permission to reproduce an image from the Ernest Gage Collection at Costessey Town Council; Paul Cooper for providing the new photograph of the Guntons workers; Jocelyn Grant of the Glasgow School of Art for assistance with Mackintosh’s (K)Napton angels; Michael Rimmer of angelroofs.com for his help with the Norwich angels; and Clare Everitt of Picture Norfolk.

15 thoughts on “Angels in tights”