After writing about medieval church glass in a few posts this article is about the stained glass that decorated secular buildings in the late C19th/early C20th century (plus a few latecomers).

Fanlight in office on All Saints’ Green, Norwich

But first, why the three hundred year gap in glass making until its revival in the mid-C19th?  Norwich was once an important centre for medieval glass painting  [1, 2]]. The kaleidoscopic appearance of this window, with a feathered angel playing a lute and a reflection of a disembodied hand doing the same above, suggests it was salvaged after one of the waves of destruction that followed the Protestant Reformation (C16-C17). 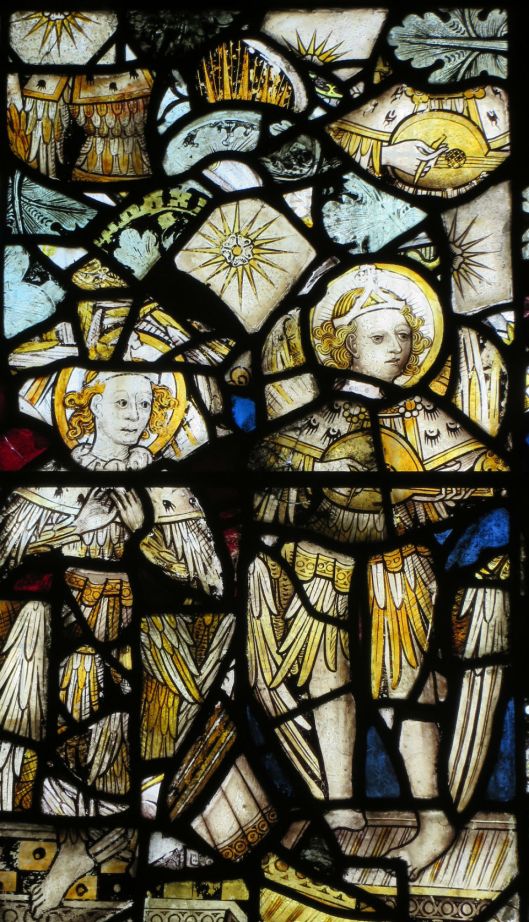 Medieval glass was almost exclusively religious. These C16th Norwich School roundels are refreshing for depicting non-biblical characters at work (plus a king enjoying the fruits of their labours)[4].

Painted vs stained glass. ‘Painted glass’ refers to the process of painting the pattern with a solution of metallic salts (e.g. silver nitrate) before firing, as in the medieval glass above. ‘Stained glass’ also includes pieces of coloured glass arranged in a pattern and held together by strips of lead.

After the puritanical rampage there was little ecclesiastical glass-making until the great religious revival of the C19th. In 1861, William Morris founded Morris, Marshall, Faulkner & Co with his Pre-Raphaelite friends, including Rosetti, Ford Madox Brown and Burne-Jones. The company initially focused on church glass but some of their patterns were applicable to the home. Taste-makers were keen to bring something of the Gothic/Arts and Crafts Revivals into their houses and the fashion for domestic stained glass can largely be traced to Morris & Co, for whom Edward Burne-Jones was a main designer [5]. 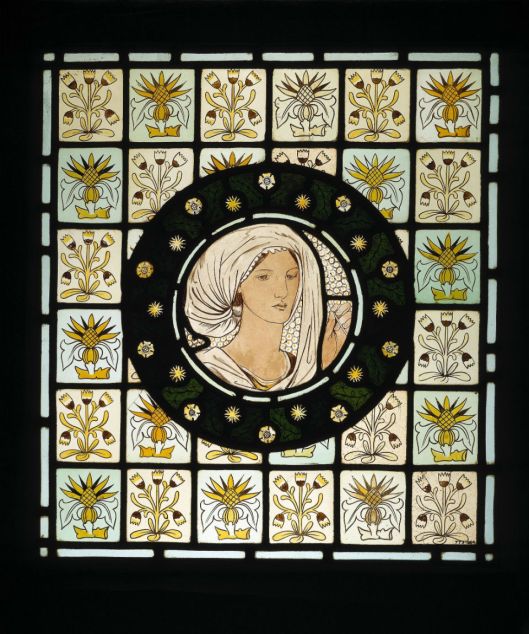 This large house in Eaton, Norwich was built in 1905 as a late example of the English Domestic Revival style.  The large window on the half-landing contains a series of nine painted-glass roundels based on the ‘Signs of the Zodiac’.

The remaining three signs of the zodiac are fitted into a round window to the side.

The hand-painted glass  below is very much in the Arts and Crafts tradition. It is in the 1852 Heigham house built by Robert Tillyard, a leather merchant and one of the founders of  the Norvic shoe factory  [6, and previous post]. 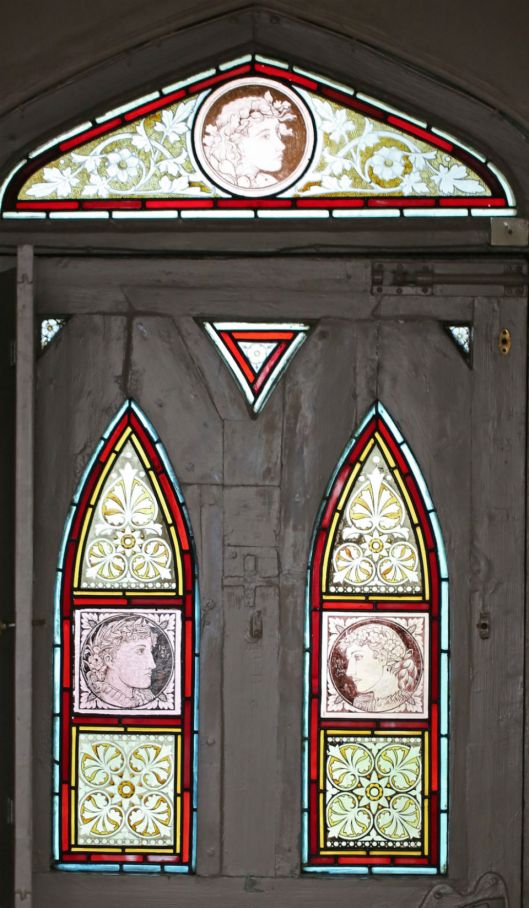 Stylistically, these paintings resemble Aesthetic Movement portraits of the 1870s-1880s. ‘Juliet’s’ strong chin, below, is reminiscent of Morris’ wife, Jane.

The top figure is unlabelled; the lower pair bear the names Juliet and Elaine. Could these be a romanticised version of Tillyard’s wife Julia and his daughter Ellen?

In contrast to the unique paintings of Tillyard’s family, the coloured glass panels that decorated so many late Victorian doors were made in large quantities. Realistically-painted  birds and flowers are typical of domestic glass of this period. 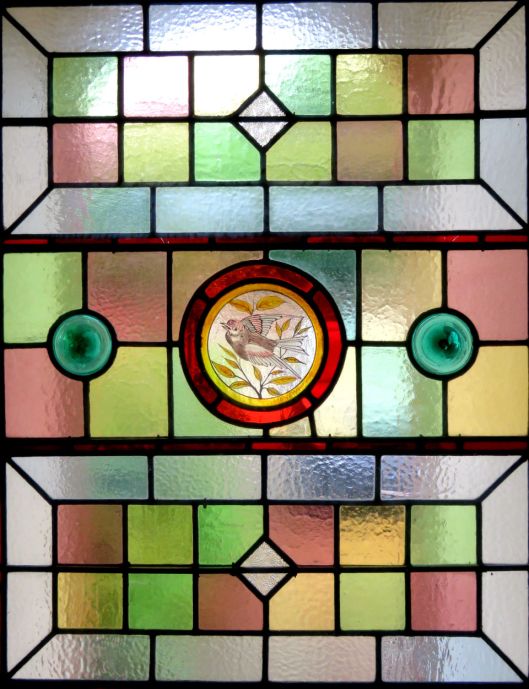 Below, the flowers in the vase are not painted but assembled from individual pieces of coloured glass. The sinuous line of the leadwork and the move to abstraction anticipates the arrival of Art Nouveau.

Door panels in a house on Unthank Road

The house with the Arts and Crafts ‘Signs of the Zodiac’ glass (above) also has stained glass  (below) containing the stylised Mackintosh rose of the Glasgow School (ca 1905). This nicely illustrates how glass design developed: from its early Arts and Crafts origins through to the Art Nouveau that persisted in some form until the First World War.

Comparison between Victorian-looking stained glass and the new designs of the early C20th shows the simplification that occurred once Art Nouveau struck: patterns were less fussy and designs tended towards the abstract.

Left, a window from George Skipper’s Hotel de Paris, Cromer (1895) and, right, an Art Nouveau door panel from Unthank Road (ca 1910) illustrate different ways of handling a similar theme: the design on the left is mostly painted, the right is a mosaic of coloured glass set in lead.

The upper window lights around the dining room in the Hotel de Paris offer a scenic tour around Cromer. The glass paintings appear to have been skilfully copied from photographs. 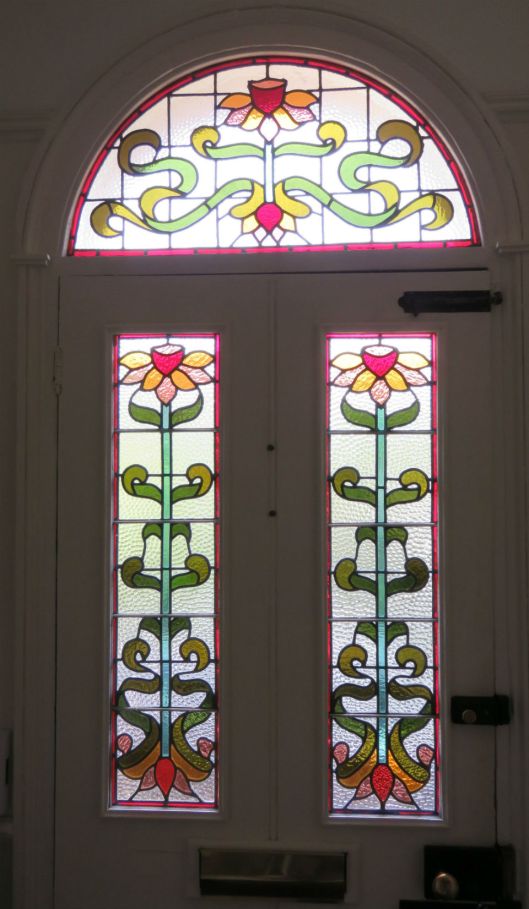 As part of this simplification the lead itself became an intrinsic part of the overall pattern. Of practical importance, the relatively small amount of stained glass allowed more light into the hallway.

The Royal Arcade, with Art Nouveau tiles designed by WJ Neatby of Doulton Lambeth, is decorated with peacocks.  In this large stained glass window the repeated motifs resemble the eyes of peacocks’ feathers.

Back of The Royal Arcade, first floor Jamie’s Italian (not accessible to the public)

After the First World war, and the demise of Art Nouveau, stained glass door panels often depicted cosy, reassuring images, as in these adjoining houses in Cecil Road.

Although the glaziers of the interwar years rejected a return to the pared down geometry of the Art Nouveau, they were content to use other, more representational images from around 1900, like the sailing ship (see post on The Sailing Ship as an Arts and Crafts Motif). 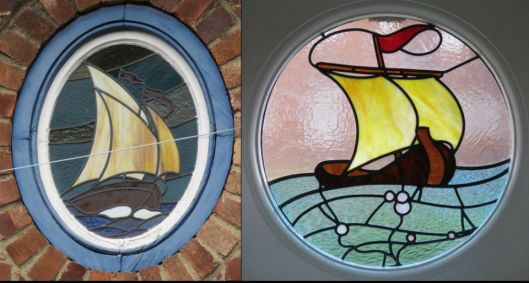 The Gatehouse PH (subject of previous post) was built in 1934. This turreted building also looks back to the Arts and Crafts style, with cartoon-like medieval glass to match.

Montage of cameos from The Gatehouse PH, Dereham Road.

The benefits of drinking. Advertising glass at The Ribs of Beef PH at Fye Bridge,Norwich

The Norwich Society helps people enjoy and appreciate the history and character of Norwich.   More details on their website www.thenorwichsociety.org.uk

Thanks to Keith Roberts, Grant Young and Gareth Lewis and all who let me photograph their glass.