Once, I took part in an alternative sculpture-trail, visiting unexpected art in public spaces: pieces hidden in full view, works that had outlived their original purpose and unseen eroticism in a monument to a national heroine.

Edith Cavell monument by Henry Pegram 1918 [1]. Originally sited in the road outside the Maid’s Head Hotel (left) it is now placed beside the Erpingham Gate of the cathedral (right).

This was in May 1999 and the sculpture trail was led by Krzysztof Fijalkowski, a young lecturer from the Norwich School of Art [2]. Here, I retrace some of his steps and add a few of my own.

Edith Cavell, born in nearby Swardeston, was a nurse during WW1. In 1915 she was shot by a German firing squad in Belgium for assisting the escape of Allied prisoners and – according to former head of MI5, Dame Stella Rimington – for espionage [3]. Notes on the guided tour (price 20p) gave a Freudian interpretation of the Cavell Memorial, mentioning the wreaths that mark Cavell’s breasts and the soldier’s erect rifle “pointing straight to her sex”. Works of art can hold many meanings although not everyone agrees with them, as Tony Hall’s cartoon shows.

Not far away we visited a curved mural, tucked away from passers-by at the top of London Street. 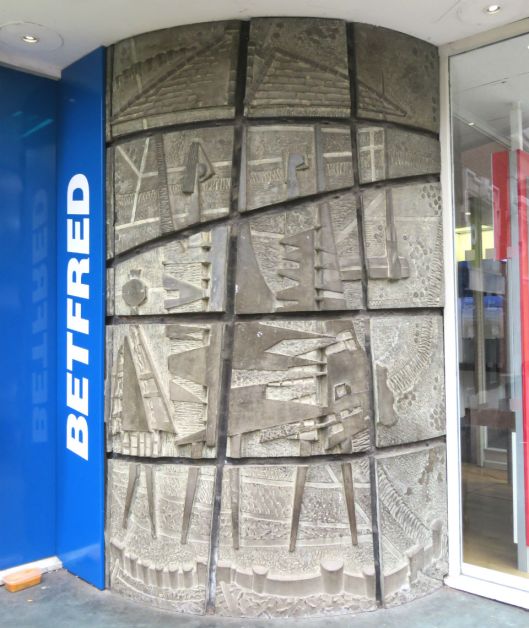 Boldly commissioned in 1974 by the Abbey National Building Society, Tadeusz Zielinski’s ‘Symbol of Norwich’ depicts a modern family, sheltered under the Society’s roof, against the background of the walled city with its cathedral (three panels up from the right). The modernist treatment is reminiscent of the Festival of Britain style of the early 1950s [4] but any obscurity of meaning will only have been increased by Betfred’s logo that – drilled and screwed into the artwork – now blocks the first row of panels. Aaaagh!

Who, when buying half a pound of six inch nails in Thorns the ironmongers in Exchange Street, has failed to notice the wall paintings on the first floor? On a recent visit, an assistant moved some ladders for me to see the paintings behind the protective screen. Emily Duke, a member of the Paston family – partners of the founder RE Thorn – told me that before the business was opened in the early C19th the building had been a hotel in which an artist painted the rooms in return for accommodation. The remaining figures seem to represent People of All Nations.

The redundant church of St Laurence is one of five along St Benedict’s Street. It has one of the most prominent towers in the city yet it and the west doorway are easy to miss as you concentrate on the steep steps down St Laurence’ s Passage [6]. In the spandrels above the door are two gruesome deaths: the roasting of the eponymous saint on a gridiron and St Edmund riddled with Viking arrows. His head was thrown into a forest but rescuers were guided to it by a Latin-speaking wolf (bottom right) crying hic, hic, hic.

High above Orford Hill stands a stag with moulting antlers – a 1984 fibreglass replica of the statue placed there about 100 years earlier.

Its original meaning is likely to be obscure for the bold wooden sign ‘GUNMAKER’, which advertised the trade of occupants George Jeffries then Darlows, has disappeared in recent years [7].

Another stop on the trail was to see one of the first purchases by the Norfolk Contemporary Art Society in 1978. At the time this work by Peter Hide, a former lecturer at the School of Art, was situated on a piece of wasteland behind the Duke Street carpark. Hide may have intended this as a formal exercise in ‘horizontality’ and balance but in its original location – a stone’s throw from Barnard, Bishop and Barnards’ Victorian ironworks – the girders provided an incidental link with the city’s industrial past.

Some time over the intervening years the sculpture has been re-sited next to the busy St Crispin’s roundabout near Halford’s store, gaining a further – less welcome – layer of meaning. The Girder Structure is now near the site of Norwich’s City Station, which was bombed in the 1942 Baedeker raids and eventually closed in 1959. This does add a further resonance to The Girder Structure in its new position but the industrial-strength attachment of the M&GN logo (presumably by the Midland and Great Northern Joint Railway Preservation Society?) overrides the artist’s original intentions.

The following examples of public art come from my own travels. At the corner of St Stephens and Surrey Streets, opposite Marks and Spencer, is a postwar block decorated with identical stone carvings hidden beneath the keystones of the three curved window arches.

Even if you can discern them without the aid of a telephoto lens (I couldn’t) it is not obvious that these animals commemorate the previous building on the site – the Boar’s Head public house, destroyed by a Baedeker raid in April 1942. The surname of the C19 licensee, Richard Norgate of Cawston, can just be made out on the pub sign below [8].

A basket-maker’s shop on nearby Ber Street was also destroyed in the 1942 air raids. The reconstructed building is now occupied by Gerald Giles’ home-electricals store but the wooden carving on the tympanum above the door recalls a different post-war life. The panel by Joseph Lloyd Royal depicts dockers unloading ships, suggesting that the building was once a warehouse for storing goods from Norwich docks [9].

The Wensum was still navigable by quite large vessels until the 1980s. 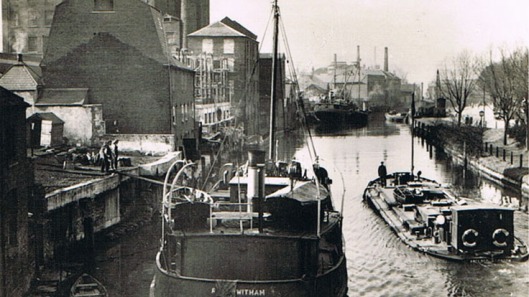 Coasters at the Port of Norwich ca 1936 broadlandmemories.co.uk

The Norfolk and Norwich Agricultural Hall (now occupied by Anglia TV), at the top of Prince of Wales Road, is built from alien Cumberland sandstone [10]. The Prince of Wales feathers relate to the prince’s involvement and to the road itself; however, there is no record of the identity of the worthies whose terracotta heads decorate the keystones of the ground floor windows. The bull’s head could simply be symbolic of agricultural trade but once you recognise the name of local philanthropist JJ Colman on the foundation stone it is impossible not to see the beast as an allusion to his family’s mustard business.

Around the year 2000, the City Council commissioned a sculpture of the Three Wise Monkeys to go on top of the pavilion at Waterloo Park. As well as seeing, hearing and speaking no evil, the monkeys have – with the passage of time – come to illustrate the speed with which technology becomes dated. Now, a monkey with an iPhone could do all three jobs.

Palimpsests – traces of past use – can be seen all around the city. Some of my favourites are the mosaics advertising what once were household names. The initials, FH&W, were used as a symbol to advertise national shoe chain Freeman Hardy and Willis in the 1960s but by the 1990s the chain had disappeared. The Maypole dairy chain was known, paradoxically, for promoting non-dairy margarine. Their name was phased out in the 1970s.

… but it does have a statue that commands an entire square – the statue of Sir Thomas Browne (1605-1689) on Hay Hill, near his house. Here he is contemplating a Roman burial urn found at Brampton, which was the subject of his book ‘Urne Burial’ (“man is pompous in the grave“). 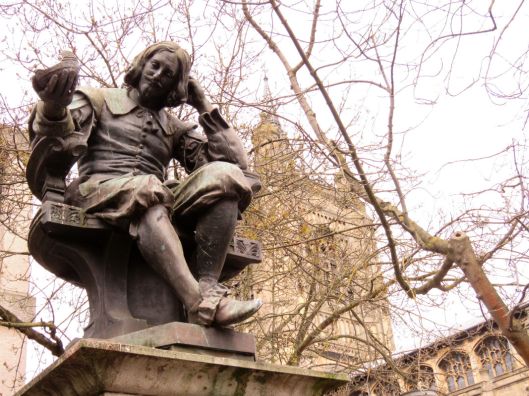 At the foot of the Browne statue are several pieces of marble statuary comprising a work entitled, Homage to Thomas Browne. In his esoteric book, The Garden of Cyrus, Browne discusses the power of the quincunx – an interlocking figure where four points mark the corners of a diamond with the fifth point at the centre. The marble blocks do not, at first, appear to be arranged in a particular fashion but by phasing out the other blocks it can be discerned that the five high-backed seats are arranged in a quincunx [12].

Left, the Quincunx from The Garden of Cyrus 1658 (Wikipedia); right, one of five marble seats, part of the Homage to Thomas Browne by Anne and Patrick Poirier 2007

In the 1980s, the smell of chocolate would float over the city – usually on Sundays – from the Nestlé/Rowntree chocolate factory next to Chapelfield Gardens. Originally this had been Caley’s Fleur de Lys chocolate factory; it was another victim of the 1942 bombing raids but the building was reconstructed in the early 1950s. The site is now occupied by the Chapelfield Shopping Mall and the lost chocolate factory is commemorated by two pairs of panels, one either side of the St Stephen’s Street entrance. These sculptures were initially made for the postwar building by local artist Edward Barker who celebrated the ingredients: cocoa, exotic fruits, maize and milk [13].

The layering of history can also be seen inside the shopping mall. Two sets of 18 panels, high up on the top floor of the arcade, are based on the 18 relief panels decorating the bronze doors to the City Hall (1938) [14]. Their designer, James Woodford, depicted trades that were then associated with a thriving industrial city but which, like chocolate-making, have gone the way of the city’s shoe and aeronautical industries shown below.

On the left,  in intuChapelfield Shopping Mall, are copies of James Woodford’s roundels (right) originally designed in the 1930s for the bronze doors of Norwich City Hall

I have drawn heavily on the essential website for local sculpture in Norfolk and Suffolk  www.racns.co.uk and thank Sarah Cocke for patiently answering my queries. Do visit this fascinating archive.

Thanks: to Professor Krzysztof Fijalkowski for his blessing; to Tony Hall and the EDP for permission to use the cartoon; to Emily Duke for the Thorns photographs; Carol Gingell of Broadland Memories for the photograph of ships on the Wensum; and the georgeplunkett.co.uk website for the 1938 photo of the stag on Orford Hill.