The story starts with Clement Paston (d1419), from the village of Paston about 20 miles north-east of Norwich. He was “a good, plain husband” whose lowly station in life was illustrated by the fact that he had to ride, “to mill on the bare horseback with his corn under him” [1]. Clement’s humble origins, probably as a bondman not entitled under feudal law to own land, were to be used against his descendants as they rose to prominence.

We know much about the rise of Norfolk’s Paston family from the cache of letters left in the C18 by the last of the line, William Paston 2nd Duke of Yarmouth. This correspondence gives unique insight into one family’s life (1422 to 1509), illustrating how – in the long period following the halving of the population by the Black Death – the descendants of a feudal serf could become elevated to the aristocracy. But it was probably the weakness of this foundation that led to the later Pastons being assailed by the Dukes of Norfolk and Suffolk who disputed their title to land. 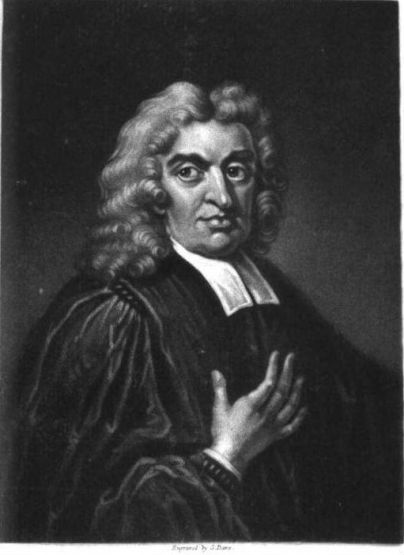 With the assistance of his brother-in-law, Clement was able to provide a grammar school education for his son William who then studied law in London and eventually became a Judge of Common Pleas [1, 2]. In addition to purchasing land in the village of Paston,  William bought his favourite manor Oxnead in 1419 and Gresham Castle in 1427 [1, 3]. Eventually, the successors of a man troubled by transporting his own corn would be able to build one of the largest barns in the county. 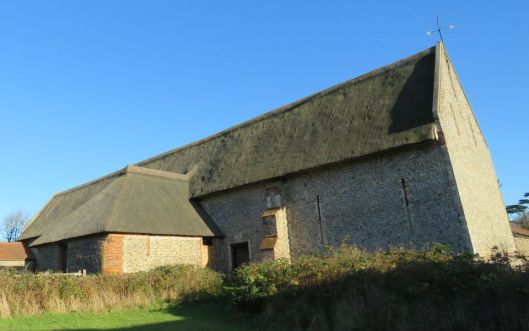 The 70m long Paston Barn in the village of Paston, Norfolk 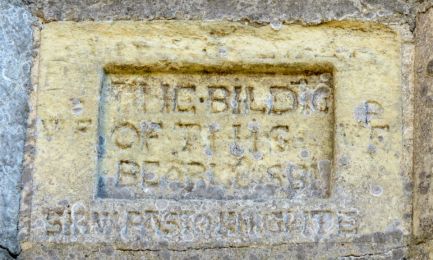 William married Agnes Barry and they had four sons and a daughter. The first was John Paston I (1421-1466), another lawyer, who married the redoubtable Margaret Mautby. They named two of their sons John: John II (1442-1479) and John III (1444-1504), not just to flummox future antiquarians but probably in honour of Margaret’s father, John, and possibly of a relative of hers who would play an unwitting part in the Paston’s troubled history – Sir John Fastolf.

Although much of the story revealed in the Paston Letters was set in the county, the Pastons had a significant presence in the city of Norwich. A green plaque announces that John Paston lived in a house on King Street after 1478 (presumably, therefore, John III). This was in what is now the oldest dwelling house in the city – Jurnet’s House, named after the Jewish trader who arrived here in the C12th [4]. It was rare at the time for being built of stone. 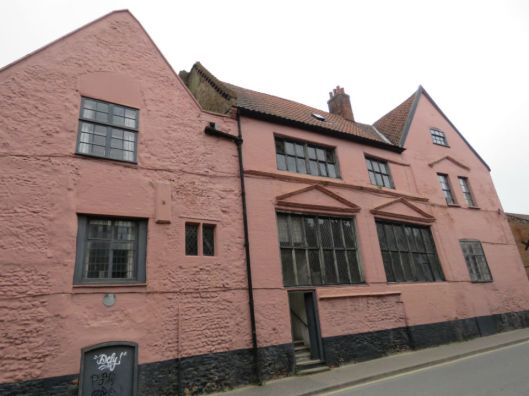 John I and Margaret had a house on Elm Hill where some of the Paston Letters were probably written.

However, this house was destroyed in 1507 by a fire that raged in the street for four days [6]. The present house on the site, the Strangers Club, was built after the fire by Sheriff of Norwich and three-times mayor, Augustine Steward. [For a fuller account of Elm Hill read the excellent Norwich Trails PDF]. 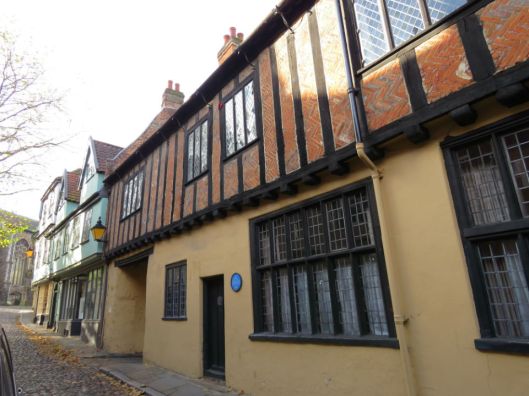 The beam above the alleyway into Crown Court Yard (to the left, above) has crisp carvings at either end relating to the cloth merchant (mercer) Steward. 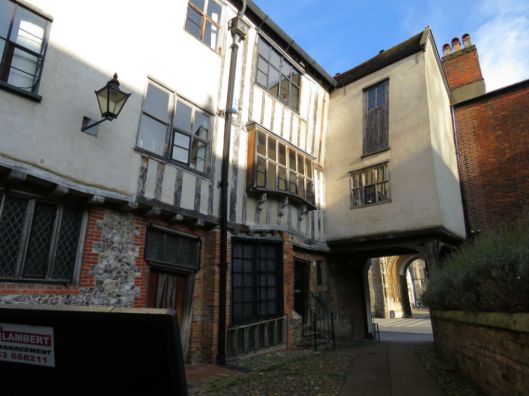 Augustine Steward’s House (1549) from Tombland Alley, a short distance from his re-built ‘Paston House’ in Elm Hill. The Erpingham Gate to the cathedral can be glimpsed through the entry.

Adjacent to Steward’s House, facing Tombland, is Samson and Hercules House. The eponymous heroes holding up the porch are now thankfully painted white after their years of humiliation while painted red to advertise a lobster restaurant. This house, with four Norwich lucams, was built in 1656 on the site of a house owned by the Pastons’ relative, Sir John Fastolf. In yet another of those coincidences so frequent in this densely historic city, Fastolf could have looked across the road to the effigy of another soldier mentioned in Shakespeare, Sir Thomas Erpingham, as he knelt in his niche above the cathedral’s Erpingham Gate (see previous post [8]). Erpingham’s posture at prayer might have been to counter the claim that he was a Lollard (pre-Reformation objector to practices of the Catholic Church) – a claim also levelled at Sir John Fastolf [9]. 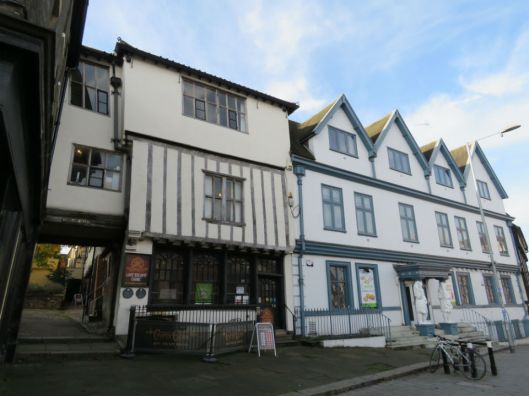 The Erpingham family contributed large sums of money to the lengthy restoration of the Blackfriars’ church in nearby St Andrew’s Plain, which was damaged by fire in 1413 [10]. John and Margaret Paston’s Norwich house was closer to the damaged church and they paid for the roof beams and for the hammer beams in St Andrews Hall. The nave of the old friary church is now known as St Andrew’s Hall and the chancel, Blackfriar’s Hall. During the Reformation Augustine Steward purchased the buildings on behalf of the city, “to make the church a fayer and large hall” [6]; ‘The Halls’ are still used as public spaces. 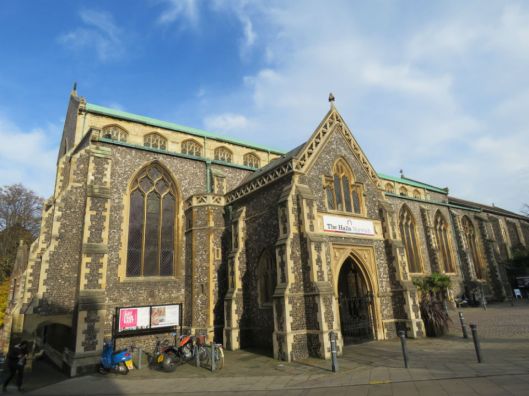 A permanent reminder of the Pastons’ generosity can be seen in the form of the Paston and Mautby coats of arms on the C15 doors they installed, to the south side of St Andrew’s Hall. 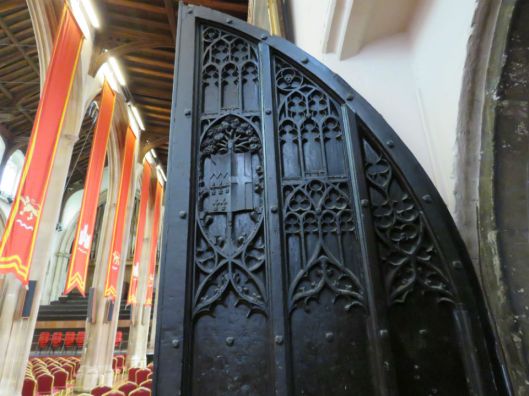 On the doors of St Andrew’s Hall, a shield bearing the Paston arms impaled with Mautby. The hammer beam roof funded by the family can be seen in the background.

John and Margaret Paston also funded the rebuilding of the nave and transepts of St Peter Hungate between 1458-60 [6]. This small church is at the top of Elm Hill at the junction with Princes Street, formerly known as ‘Hungate’. (I fondly recall Saturday mornings at the Hungate Bookshop where my children would sit and read).

Hungate. ‘Gate’, which means street or opening, derives from the Old English ‘geat’ or the Old Norse ‘gat’. ‘Hun’ may refer to the place where the bishop kept his hounds [11]. 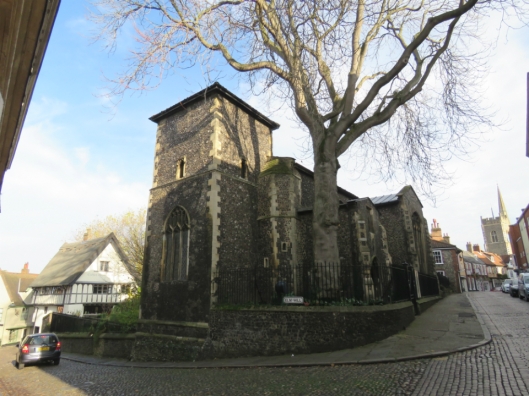 St Peter Hungate with Briton’s Arms on Elm Hill to the left and Princes Street/Hungate to the right. The cathedral spire just tips over the tower to St George Tombland

Two decorative corbels in the corners of the south transept record the Pastons’ generosity. 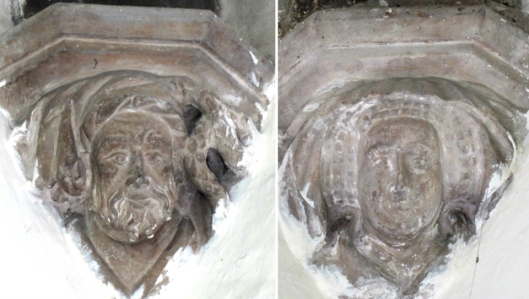 In addition to their house on Elm Hill, The Pastons had a property on Princes Street that may have provided overspill accommodation. Coincidentally, opposite Paston’s House in King Street (now Wensum Lodge), a beam bearing the name ‘Princes In’ survives on what was – until the 1970s – the old Ship Inn. This lintel is thought to have been transferred from the inn on Princes Street, which was first mentioned in 1391 [12]. 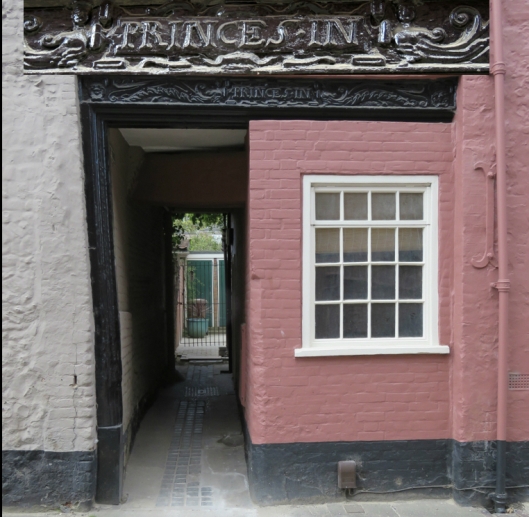 168 King Street, entrance to Ship Yard with ‘Princes In’ (enlarged) on the lintel

This has been an intentionally Norwich-centric look at the Pastons but the great dramas surrounding this family were played out in the county, against a broader backdrop of national instability during the Wars of the Roses. The Pastons were to be besieged in three of their houses. First, in 1448 Lord Moleyns laid claim to Gresham Castle, which William Paston had bought from Thomas, the son of poet Geoffrey Chaucer. With the support of the powerful Duke of Suffolk, Moleyns sent 1000 armed [13] men to expel Margaret who famously wrote to her husband in London to send crossbows and poleaxes. In the event, Moleyns’ men mined the walls of Margaret’s  chamber, she was “plukkyd out of here howse” then her mansion destroyed.

The greatest upturn in the Pastons’ fortunes came at the death of their kinsman, the fabulously wealthy soldier Sir John Fastolf, to whom John had become legal adviser. John claimed that two days before he died (1459) the old soldier had made a verbal will agreeing to sell him all his Suffolk and Norfolk lands for the bargain price of 4000 marks provided that John oversaw the foundation of a chantry at Caister to pray for Fastolf’s soul. It was perhaps inevitable that disinherited heirs and local noblemen would contest a deathbed will dictated in the presence of  the main beneficiary. In 1461 [2], a month after the coronation of the new king (Edward IV), the Duke of Norfolk felt able to take direct action by besieging Caister Castle with 3,000 men [14]. There were further altercations but the castle was not to be returned to John Paston II until after the restoration of Henry VI in 1470. 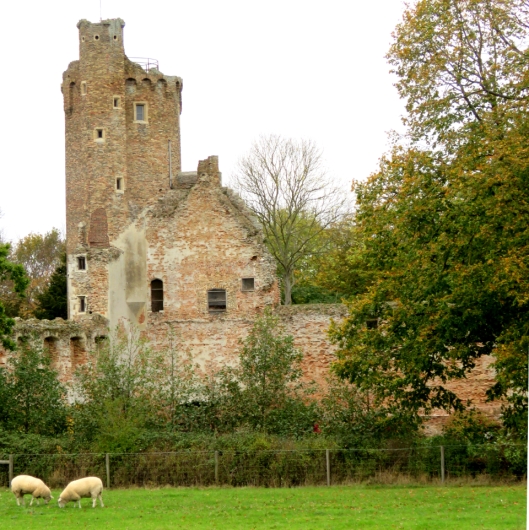 Fastolf’s Caister Castle, reduced by the Duke of Norfolk’s guns; between Mautby (birthplace of Margaret Paston) and the east Norfolk coast

The Pastons also inherited Fastolf’s manors in Hellesdon and Drayton but in 1466 the powerful Duke of Suffolk seized Drayton, just across the Wensum from his own stronghold in Costessey. He then attacked their manor at Hellesdon, not only destroying what had been Margaret’s home for the last six years, but ransacking their tenant’s houses and even the church. Suffolk evidently felt that as the king’s brother-in-law, and with the Mayor of Norwich in his pocket [13], he could act with impunity. 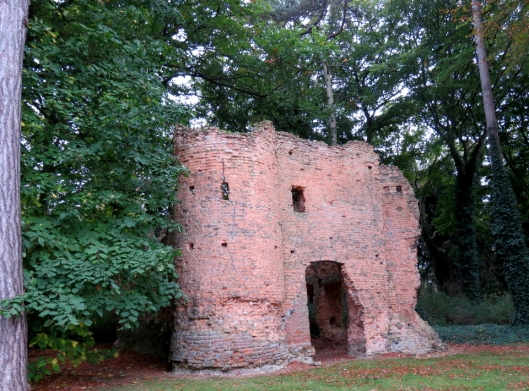 Drayton Old Lodge. It was once a manor house owned by Sir John Fastolf, built as a ‘plaisance’ overlooking the Wensum valley.

In 1466 John Paston died in London and over six days his body was conveyed back to Norfolk, accompanied by a priest and twelve torchbearers. The cost of the funeral exceeded £250, more than a year’s income from the Paston estates [13]. The extravagance and extraordinary pomp surrounding the occasion were perhaps a final riposte to those who had dragged his family through years of turbulence. The hearse cost more than £30; cloth for the mourners, £20; alms and doles to be distributed to the poor, more than £60. John Paston’s body rested for one night at St Peter Hungate before completing the journey to Bromholm Priory, near Bacton, where his father had been buried. 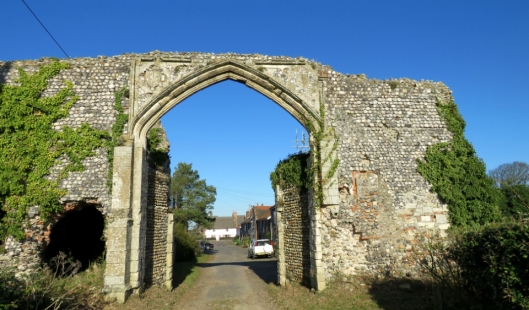 Bromholm Priory near Bacton had become a major site of medieval pilgrimage after a large piece of the true cross – brought from Constantinople – was incorporated into its Holy Rood. Twenty two pounds worth of candles illuminated the hearse and such was the stench of burning tallow that a glazier had to be paid 20 pence to remove two panes of glass ‘to late out the reke of the torches’. The mourners at John Paston’s funeral feasted on 49 pigs, 49 calves, 10 cows, 34 lambs and 22 sheep that had taken two men more than three days to flay [13].

Margaret Paston died in 1484 and is buried in her home church of Mautby, not far from Caister. 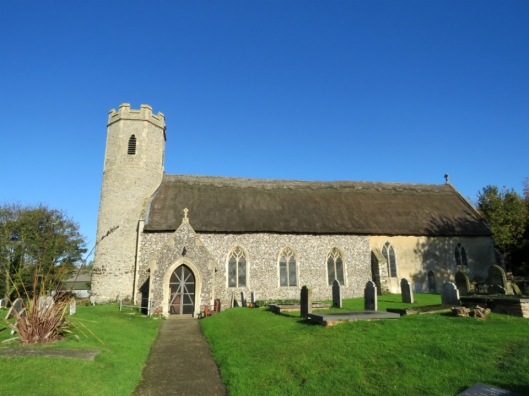 SS Peter and Paul, Mautby. Following the demolition of an aisle during the Reformation, Margaret Paston’s grave is now on the outside of the south wall.

Margaret and John’s descendants  – like the second Earl of Yarmouth – lived in less turbulent times, but when he died in 1732 his titles died with him. Amongst his possessions was the Paston Treasure, a painting of the Paston collections once held at Oxnead Hall. Painted around the middle of the C17, in the manner of Dutch vanity paintings [15], it depicts some of the objects amassed by William Paston (1610-62) and his son Robert (1631-83), both of whom had travelled through Europe to the Middle East. Robert was a founding member of the Royal Society and so the collection might be thought to come from his cabinet of curiosities. However, there are so many symbols of the transience and futility of life (hourglass, watch, guttering candle, lute with broken string, the falling flagon) that it is more vanitas painting than a curiositas [15]. The most heart-breaking counterbalance to all these vanities is the image of a pretty young girl; whether Mary Paston or her older sister Margaret she holds roses in full bloom, a poignant reminder that all things must pass. Exciting new research on the Paston Treasure, by Norwich Castle Museum and the Yale Center for British Art, will be revealed in an exhibition opening at the Castle Museum in summer 2018. 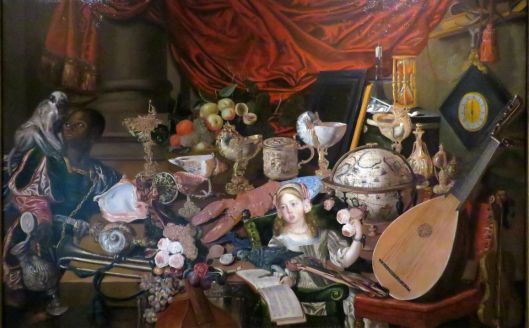 Thanks to Mathew White, Events Manager of St Andrews Hall for opening doors and to Dr Francesca Vanke, Keeper of Art & Curator of Decorative Art at the Castle Museum for information on the Paston Treasure.

16 thoughts on “The Pastons in Norwich”