Once, I stayed in a hotel next to the Pantheon in Rome. Constructed some 2000 years ago it is a breath-taking example of the Roman genius for engineering – its circular rotunda spanned by the world’s largest unreinforced concrete dome. Surely, anything bearing that name in Norwich could only be a much-diluted version of the Roman Pantheon so what was ours really like? Two weeks after my previous post [1] I received fascinating correspondence that I show here in order to set the historical record straight. First, a brief recap.

The portico of the Roman Pantheon with the rotunda behind 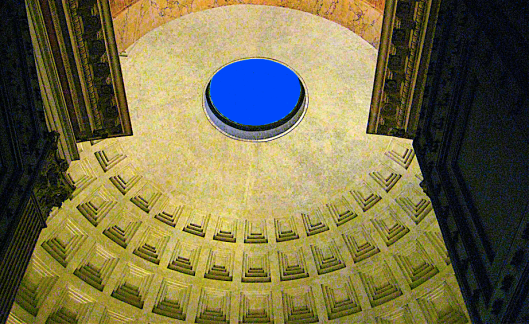 The dome was coffered with diminishing panels to lighten the weight. The central oculus is open to the weather. Built ca 100AD

In my previous post on Norwich Pleasure Gardens I mentioned London’s Pantheon  – an impressive structure that prompted the building of our provincial version. The 1000-seat Norwich Pantheon was erected in New Spring Gardens – later called Vauxhall Gardens – on the riverside, off King Street. 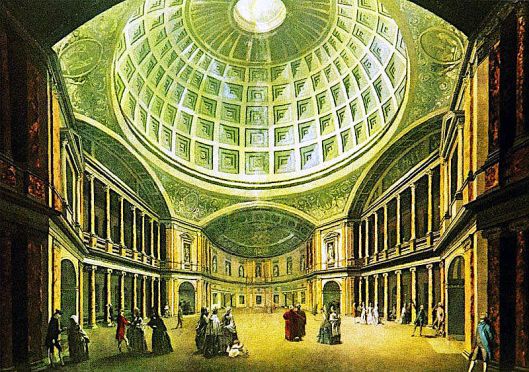 The clues to Norwich’s own  Pantheon are few and start with Hochstetter’s map of 1789.

This map clearly shows that the Norwich Pantheon on Riverside was originally octagonal, as does Cole’s map of 1807. 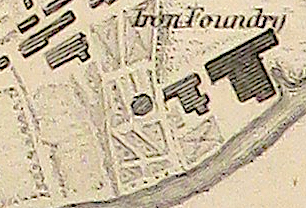 Cole’s plan of 1807 with The Pantheon at centre. Courtesy Norfolk Museums Service

However, Cole is thought to have based his map on Hochstetter’s earlier survey [see 2] and in 1807 he wrongly drew The Pantheon in this riverside location from which it had been absent for about a decade. In the 1790s Samuel Neech had bought the defunct Vauxhall gardens, including its Pantheon, and used the building materials to construct a new rotunda (for which he retained the old name of The Pantheon) in his own Ranelagh Gardens. This rival garden – situated just off the present-day St Stephens roundabout – now had a building that is said to have accommodated 2,000 persons [3]. (These pleasure gardens had various owners who gave them different names but for simplicity’s sake I will call them ‘Ranelagh/Victoria Gardens’ here.)

In 1849 the Ranelagh/Victoria Gardens were bought by the Eastern Union Railway Company who repurposed the existing buildings [3]. Fortunately, Norwich Victoria Station survived well into the C20 so photographs exist.

I ended the previous post by asking if we could be looking at The Norwich Pantheon, a ghost from over two centuries ago.

It was at this stage that Bill Smith – a railway enthusiast who had come to Victoria Station from a different angle – asked if there was evidence that the above building was  the fabled Pantheon. The booking office in the photograph approximates to a circular form rather than the distinct octagon shown in Hochstetter’s map. Might it therefore be a different building, such as the ‘amphitheatre’ that a previous owner is said to have constructed eight years before The Pantheon appeared on the site [3]? Unfortunately, Hochstetter’s plan shows no large buildings on the Ranelagh/Victoria site.

But, using the excellent Norfolk Map Explorer (http://www.historic-maps.norfolk.gov.uk/), Bill had downloaded the 1842 tithe map that does show a building on the Ranelagh/Victoria Gardens plot. It is hard to make out whether the building is circular or octagonal.

However, the 1830 map by WS Millard and J Manning gives a clearer view. Ignoring the flaps fore and aft the main building appears as an octagon, or is that a rectangle with rounded corners? Those rounded corners turn out to be useful. 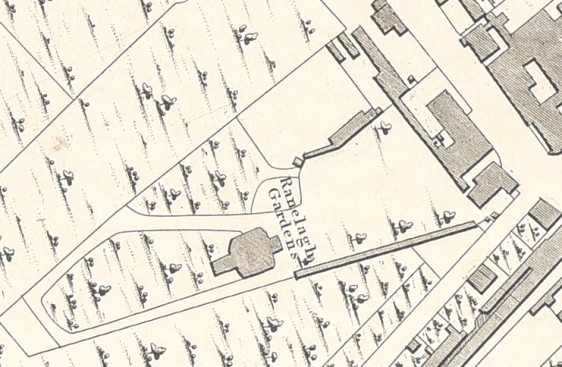 From the 1830 Plan of Norwich by WS Millard and J Manning. Courtesy Norfolk County Council

By the time Ranelagh/Victoria Gardens had become Victoria Station the main garden building, now wider, was situated between the two platforms. Here, Bill has placed the rotunda on a 1905 OS map. 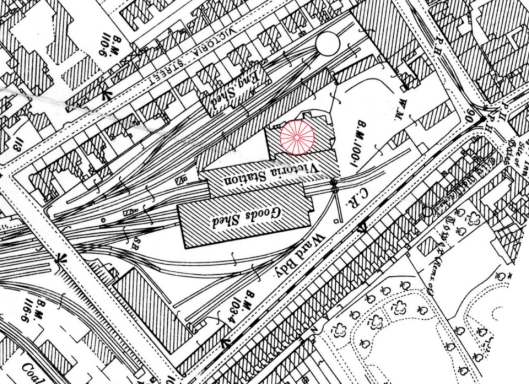 On a more detailed map of 1880 Bill was able to scale the rotunda to fit two circular segments of the building (the ’rounded corners’) and, using the 56½-inch gauge of the railway tracks as a standard, to calculate the rotunda’s diameter at around 74 feet.

The rotunda sized by Bill Smith to fit the rounded corners.

The panelled conical ceiling with its roof light therefore sits on what is almost certainly a circular rotunda, not an octagonal one. Samuel Neech may have recycled material from the old Norwich Pantheon for his own building but it seems quite clear that he didn’t stick to the original’s octagonal floor plan. Bill’s evidence strongly indicates that The Pantheon was the large circular building so an ‘amphitheatre’ has to be something else. Indeed, Fawcett supports the idea of two separate buildings when he describes the layout after the Eastern Union Railway Company took over the gardens in 1849: “Station platforms were laid on either side of the Pantheon … The Amphitheatre became a ticket office and luggage room.” The amphitheatre would therefore be the rectangular building behind, and extending either side of, the entrance portico. 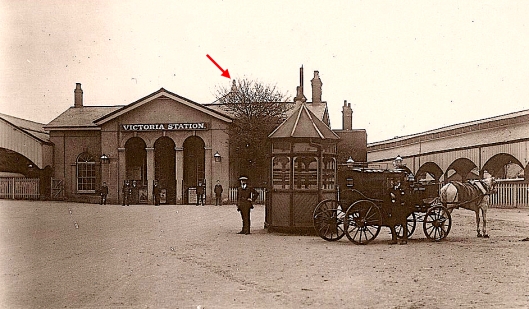 Norwich Victoria Station in the early 1900s. Behind the entrance portico is situated the Amphitheatre. The roof light of the Pantheon (arrowed) peeps out to the rear. Wikipedia, Creative Commons

Below, this aerial photograph from 1935 provides interesting insight into the layout of the station inherited from the Ranelagh/Victoria Gardens. First, to the left, is the entrance off St Stephens Road as shown in the photograph above. Next, perpendicular to this, comes the Amphitheatre with a pitched roof; this is followed by the rotunda/Pantheon; followed by a smaller building with a pitched roof; then a glimpse of the triangular garden illustrated in the larger scale map (two images above). 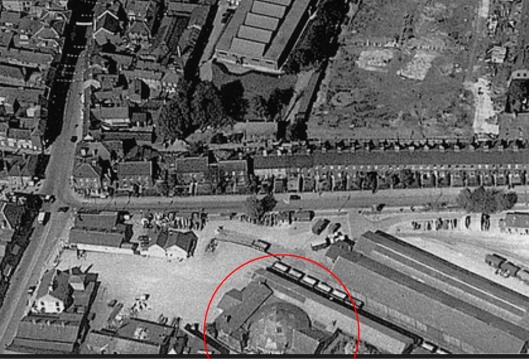 In 1946, just after the war, the buildings in the station complex were roofless, providing an accidental glimpse into the internal layout, illustrating the large rotunda/Pantheon at centre.

Update: After posting this article, Grant Young recommended another 1946 aerial photograph from ‘Britain from Above’, which shows the roofless station complex in greater detail [5].

The red star indicates the postwar Victoria Station on the site now occupied by Marsh Insurance. Below, the enlargement clearly shows the circular section of The Pantheon. ©Historic England/Britain from Above EAW001999

Bill then outlined the main compartments as far as possible.

The plan drawn by Bill Smith

With this plan in mind it is now possible to walk ourselves through the rooms of the Ranelagh/Victoria Gardens as described in 1849 [3]:

“Two sides of the spacious area which presented itself on passing the entrance, to the west and the north were occupied with “boxes”, or “arbours”, where parties could sit, and enjoy their refreshments, or sip their wines, while they listened to the instrumental or vocal music … On the South, was a large room … used as a “Nine-pin-room”. It opened into a spacious and excellent bowling green. To the eastward, and nearly in the centre, of the grounds, stood a building, called ‘The Pantheon’. Over the entrance was an orchestra; and on each side of the entrance-passage were rooms, from the windows of which refreshments were supplied. The passage led to a spacious and lofty saloon, often converted into a ballroom; beyond this was an arena, which was, in the Assize-weeks, used as a Concert-room; at other times it was occasionally used as a circus … and anon a theatre … Beyond the Pantheon, the grounds were tastefully laid out, and several walks for promenading were constructed … The palmy days of these gardens is now fading fast … but there was a time, when they were the resort of our fashionable aristocracy; and the public breakfasts … were amongst the most gay and pleasant assemblages, that it was ever our good fortune to encounter.”

The illustration below gives a sense of these Gardens when they were ‘the resort of our fashionable aristocracy’.  [Added 7th March 2019]. 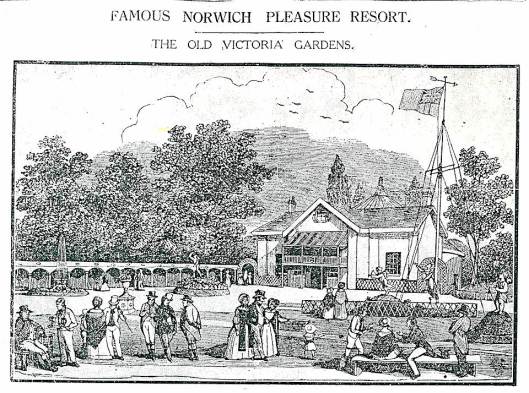 Thanks. The idea for this supplementary post was prompted by Bill Smith’s key insights into Victoria Station and the buildings it had inherited from the Ranelagh/Victoria Gardens. Bill worked out where the Pantheon fitted into the station’s building plan and calculated its size; I am grateful to him for letting me reproduce his ideas. I also thank Grant Young for suggesting the final aerial view and Rosemary Dixon of the Archant Archives for the final print of Victoria Gardens.