In an earlier post I mentioned two turreted pubs that reminded me of the ‘medieval’ towers by Victorian architects like the Williams, Morris and Burges – Gothic Revivalists who peddled nostalgia for a pre-industrial past. Why did these and other pubs continue to refer to the Middle Ages half a century or so after the height of Victorian medievalism?

The Artichoke PH in 1932 (c) georgeplunkett.co.uk

The first pub, at the end of Magdalen Street, was The Artichoke with its conical roofs so reminiscent of chateaux of the French Middle Ages. Built in 1934, The Gatehouse on Dereham Road shares a clear resemblance. Neither pub would have been out of place in 1860. William Morris’s version of the Gothic Revival in the mid C19th can be seen as a reaction to industrialisation – a symbolic retreat to sunnier times when honest craft was appreciated. However, the medieval-style pubs of the 1930s looked back at Merrie England from a different viewpoint: the intervening First World War provided a new and powerful reason for reacting against mechanisation and for settling on a style that so strongly rejected C20th Modernism.

The Gatehouse is clearly built in the revived medieval style. One of its intriguing stylistic details is the chequering produced by alternating panels of ubiquitous Norfolk flint with pressed concrete blocks substituting for the stone that is so scarce in Norfolk[1].

A likely model for The Gatehouse was the Barbican gatehouse (1539) to the toll bridge in Sandwich, Kent [2]. The two-storeyed bays are very similar and the names are near-enough synonymous.

A third pub, The Barn, at the bottom of Grapes Hill shares a family resemblance to The Artichoke and The Gatehouse, perhaps not surprisingly since  all three were designed by Norwich architects Buckingham and Berry whose offices were in Prince of Wales Road. The original pub was destroyed during the bombing raids of 1942.

The cockerel sign on The Barn marks a takeover by Courage but the lazy anchor in the gables shows that the pub was originally built for Norwich brewers, Bullards. Their sign of the jolly landlord was designed in 1909 by one-time student of Norwich School of Art, A. J.(later Sir Alfred) Munnings. 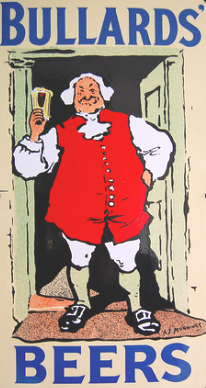 A fourth family member is the Constitution Tavern on Constitution Hill, also designed in the early 1930s by Buckingham and Berry. With its projecting double-height semi-circular bay, capped with a conical roof, The Constitution Tavern taps into the medieval style while the catslide roof over the twin doors references the Arts and Crafts houses of Charles Voysey from the beginning of the C20th.

Not only were these four buildings designed by the same architects but they were all built by the same Norwich building firm of RG Carter.

The Artichoke and The Barn stand just outside the city walls, at the Magdalen and St Benedict’s Gates, respectively. The Gatehouse and The Constitution Tavern are situated further out from the city: the latter on Constitution Hill on what was the old North Walsham Turnpike; the former on Dereham Road, near another circle of hell – the outer ring road.

The construction of the outer ring road in the 1930s helped relieve unemployment and established an outer boundary to the expanding city. Up until the First World War most citizens lived within the walled city, a very large number of them in the Norwich Yards – dwellings made in the gardens and courtyards of grander houses abandoned by the wealthy. As Frances and Michael Holmes have graphically shown, by the 1930s these ramshackle houses were poorly ventilated, ill-lit and very unsanitary [3].

The conditions of life in this yard must be hard indeed. An open channel runs in front of the houses containing sewage, slops and rainwater. The smell was neither imaginable nor describable. One battered pump made in 1808 supplies water to…three yards. [Norwich Mercury, see 3]. 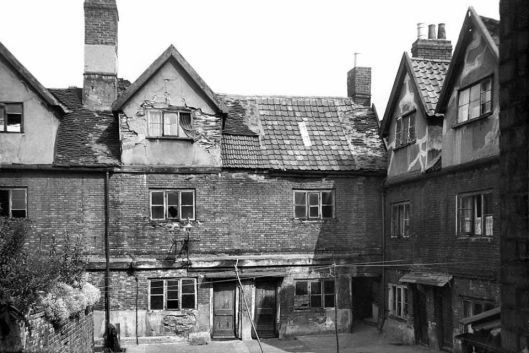 To make ‘homes fit for heroes’ the 1919 Housing and Town Planning Act required local authorities to provide houses for families. The City Council responded by starting to build the large estates that now more-or-less encircle the medieval city. The council also received government funding to build five parks (Wensum, Eaton, Heigham, Waterloo and Mile Cross Gardens) that gave pleasure to the rising population as well as providing unemployment relief  [4]. In the 1920s and 30s Captain A Sandys-Winsch supervised the laying out of these parks and planted the characteristic avenues of trees that still soften the roads beyond the old city walls.

In lock-step The Prince of Wales (centre), with Sandys-Winsch (on his right), opening Eaton Park in 1928. Courtesy  of [5]

It was against this background of civic improvement that the new public houses were designed. Morgan’s Brewery, for example, took advantage of the new estates and the increased traffic on the ring road to build The Gatehouse on the site of a former pub. The wave of pub building was not confined to Norwich for about 1000 new pubs were built countrywide in the 1920s, and 2000 in the period 1935-1939.  Most of these were part of the Improved Pub Movement that hoped to change the perception of public houses as places of drunkenness to a more respectable one with separate saloon bars, dining rooms, games rooms and gardens that would encourage women.

‘Both were on their knees and unable to rise’. Carlisle 1917. Courtesy www.cumbriaimagebank.org.uk

During the First World War the government became concerned by the absenteeism and poor productivity in munitions factories caused by drunkenness. In what became known as ‘The Carlisle Experiment’ the government nationalised breweries and pubs around Carlisle and parts of the Scottish Borders; they also redesigned pubs and food-providing taverns to try to control the excesses of munitions workers [6]. This experiment in public house reform had national impact and provided a model for the new public houses of the 1920s and 30s.

In 2015, Historic England awarded The Gatehouse and 20 other national pubs Grade II listing in recognition of their place in the historic Improved Pub Movement [7,8]. Virtually all are built in a backward looking Arts and Crafts style.

The rather baronial bar of The Gatehouse (c) Historic England/Pat Payne Ref: DP172339

The stained glass panels, just visible in the photo above, are thought to reference the Bayeux Tapestry, underlining the diversity of sources that the Improved Pub Movement used to evoke the faux medieval style. 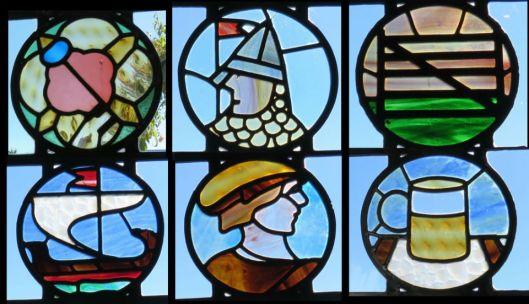 Montage of stained glass panels in The Gatehouse

The building of roads, estates and pubs therefore took place as a more or less coherent campaign under the general banner of ‘improvement’. RG Carter’s building firm played a major part in shaping the outer city. Where the A1024 crosses the Drayton Road they built the Mile Cross Estate of 92 houses (1925) together with the shopping centre (and a similar one on the opposite side of the city where The Avenues crosses the ringroad). 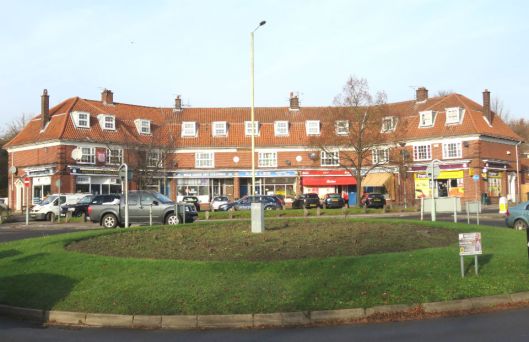 Carters built a mirror image to this curved shopping centre, out of shot to the right

In 1929 Carter’s also built the nearby pub, The Galley Hill, in a simple Tudor Revival style. The S&P carved into the half-timbered gable end shows it was built for the Norwich brewery of Steward and Patteson.

Carters also built The Mitre in Earlham Road for Bullards – a solid Tudor Revival building with jettied central bay and timbered side bays infilled with herringbone brick. The local newspaper said it was a vast improvement on its Victorian predecessor and that the quality of its ‘half-timber work is not of the kind associated with speculative work and liable to be blown off by the wind.’ That is, the woodwork appeared to be a more integral part of the structure than the superficially applied beams on speculative pubs built in ‘Brewer’s Tudor’ [9]. It was presumably the cheapened form that John Betjeman referred to as ‘various bogus-Tudor bars‘ in his poem, Slough. 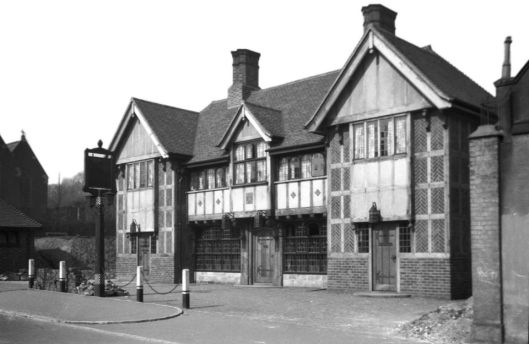 It is not clear who built The Boundary Inn at the intersection of the ring road and the A140 where a Mile Cross boundary marker used to stand. However, this pub does have the usual stylistic tics of the Tudor Revival style, with its high-pitched roof, prominent chimney, a hint of half-timbering and Tudor-arched doors. It was built in 1928 for Young, Crawshay and Youngs. 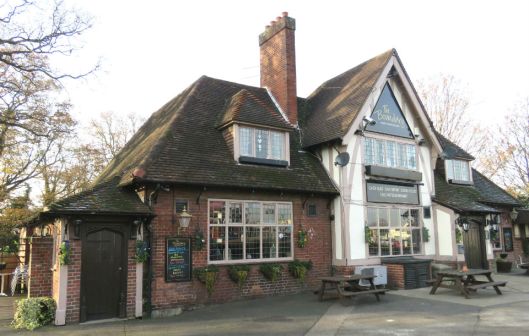 Carters constructed the Bull Inn at Hellesdon [1935] although its historical credentials are Tudor-lite compared to The Mitre. 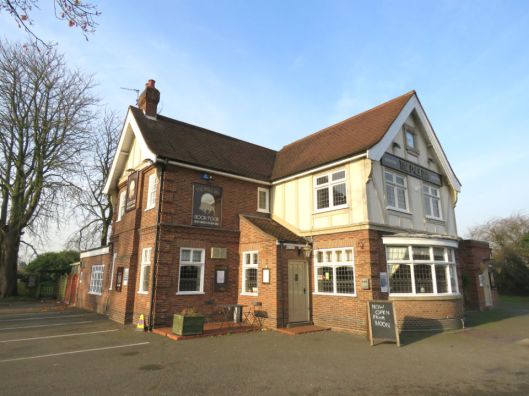 But after World War II the moment had passed, the Gothic and Tudorbethan revivals had lost their fascination and a new austerity had arrived, as can be seen from The Dial on Dereham Road, built for Bullards  by RG Carter in 1950.

I am indebted to the RG Carter Archive, Drayton, Norwich for supplying photos and information. I am also grateful to: Gareth Hughes for making the connection between The Gatehouse and Barbican Gate, Sandwich; Stephen White of Carlisle Library, Frances Holmes, and the invaluable Plunkett archive (www.georgeplunkett.co.uk).