There is little now to suggest that Norwich had an industrial past but the parish of Coslany, around the River Wensum, was once home to iron works, shoe factories, an electricity generating works and a brewery – all providing employment after the slow decline of the city’s wool-weaving trade. 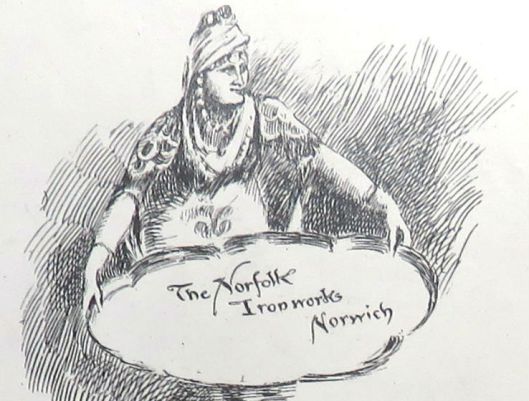 From the mid-nineteenth to the mid-twentieth century, Barnard Bishop and Barnards’ Norfolk Iron Works was a major part of the industrial landscape of Norwich-over-the-water.

Ordnance Survey 1908. Reproduced with the permission of the National Library of Scotland (maps.nls.uk/index.html)

The son of a farmer, Charles Barnard (1804-1871) started making domestic and agricultural ironwork in Pottergate in 1842 [1]. Having lived on the land, Barnard was aware of the damage that wild animals could wreak on crops and began to experiment on a machine for weaving wire netting. Initially the netting was made on the machine below but later it was produced by a powered loom. Netting was to be remain a core activity well into the C20. 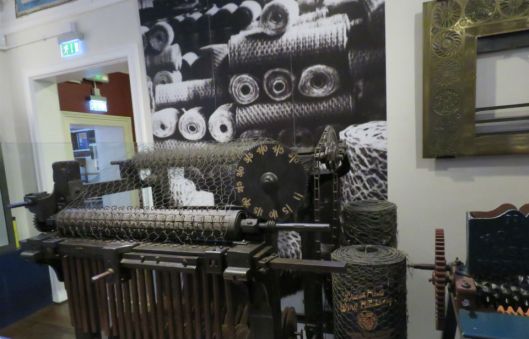 In 1846 Barnard went into partnership with John Bishop, then in 1859 Barnard’s sons Charles and Godfrey joined the business, becoming Barnard, Bishop and Barnards.

This ‘four Bs’ rebus marks the firm’s attachment to puns: their designer Thomas Jeckyll used his own two-butterfly signature from the time of his early collaborations with Barnard and Bishop. Jeckyll, incidentally, was a friend of Frederick Sandys who drew the portrait of Charles Barnard (unable to show): both inserted a rogue ‘y’ into their surname.

I have already written at length about Jeckyll [2-5] but it’s not possible to omit him entirely since it was his designs that brought Barnards national attention, elevating some pieces to high art. Two examples: first, the intricate wrought and cast-iron ‘Norwich’ gates that won the firm ecstatic praise at the 1862 International Exhibition;

The Norwich gates, given to the Prince and Princess of Wales in 1863 as a wedding present by the citizens of Norwich and Norfolk. Now at Sandringham House, Norfolk. Courtesy of The Museum of Norwich

second, Jeckyll’s associations with a group of London artists – notably James Abbott McNeill Whistler – made him a key figure in the Anglo-Japanese Aesthetic Movement. Jeckyll used japonaise designs for Barnards’ fireplaces while his cast iron sunflower (to be seen on the gates of Heigham Park and Chapelfield Gardens) came to symbolise the Aesthetic Movement. 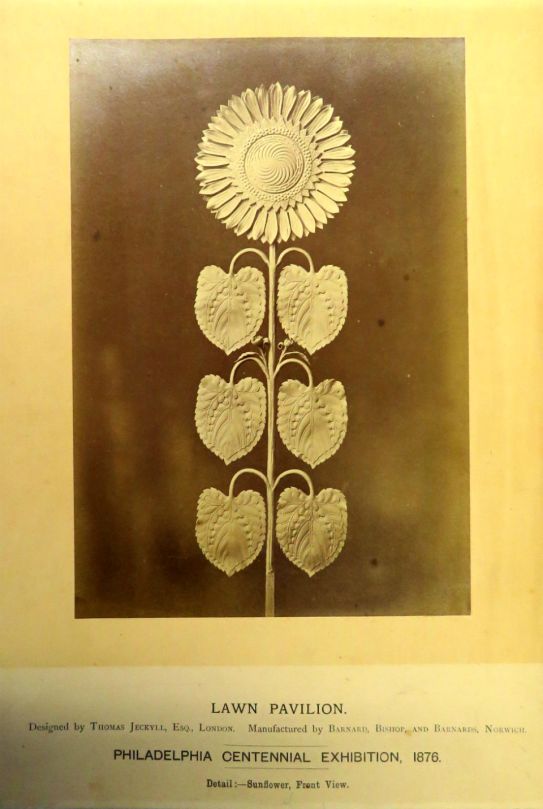 In 1871, Barnards moved their iron works to Calvert Street in the parish of St Michael-at-Coslany.

St Miles Works from the river. Courtesy The Museum of Norwich

The business contained a large foundry at one end while a new building housed the netting mill, for which steam was used to power the looms [1]. The factory was also known as St Michael’s Works; Miles is a diminutive of Michael and both are also applied to one of the city’s most beautiful churches, the elegant St Michael Coslany.

Barnard Bishop and Barnards St Miles Works 1951. The works had several tall chimneys but the one shown here may belong to Bullard’s Anchor Quay Brewery on the other side of the river. ©2017 RIBApix

At the St Miles site the workforce of ca 400 produced an eclectic range of utilitarian objects. The drawing below lists: “a coke barrow, a garden arbour, trellis, wire netting, a garden seat, a chair, a pheasant feeder, a swing water barrow, a hose reel, a fire dog, a grate, a table, a roller & a sheep trough. ‘All made on the spot’“.

Still desirable. Garden chairs from Barnard Bishop and Barnards 1884 catalogue for their London showroom. Courtesy of The Museum of Norwich 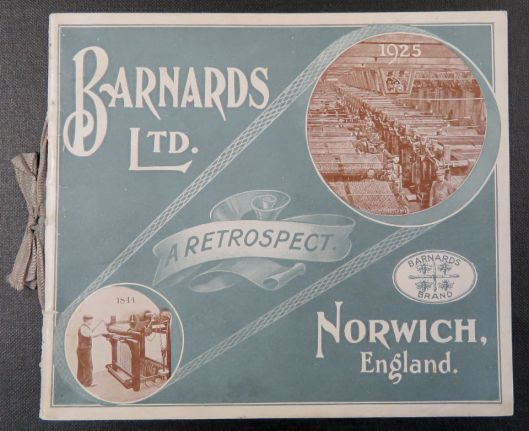 Barnards celebratory brochure  1844-1925. Courtesy of The Museum of Norwich

The railways arrived in Norwich in the mid-C19 and Barnards provided much of the metal work for at least two of the city’s three stations. These ornate barriers at Norwich Thorpe station were made by Barnards and were designed by W. Neville Ashbee, the company architect for the Great Eastern Railway. 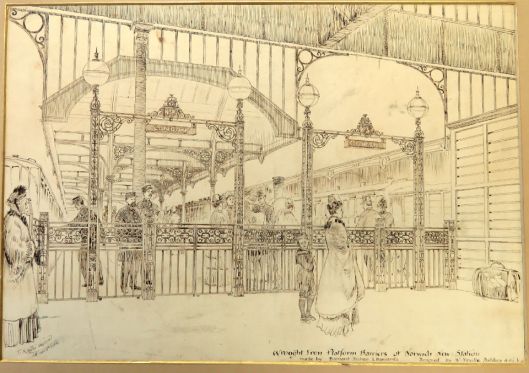 The wrought iron platform barriers at Norwich Thorpe station. Courtesy of The Museum of Norwich.

The barriers have gone but the cast-iron canopy supports with the elegant spandrels can still be seen along the platforms.

The station forecourt is still enclosed by fine examples of Victorian ironwork.

Barnards also cast the columns and spandrels  for Norwich City station. This station near the St Crispin’s roundabout was the terminus of the Midland and Great Northern Joint Railway whose hub was at Melton Constable. It closed to passengers in 1959.

Norwich City station. Courtesy of The Museum of Norwich NWHCM 118.959.51

In 1882, a river bridge was built to provide access to the new City Station. St Crispin’s Bridge, which was manufactured by Barnards, became part of the ring road in 1970 taking traffic in clockwise direction.  A new bridge built parallel to it takes traffic in the opposite direction. 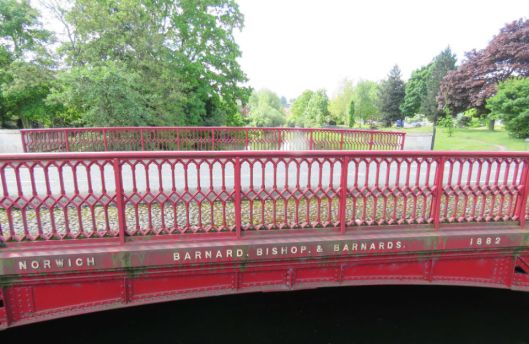 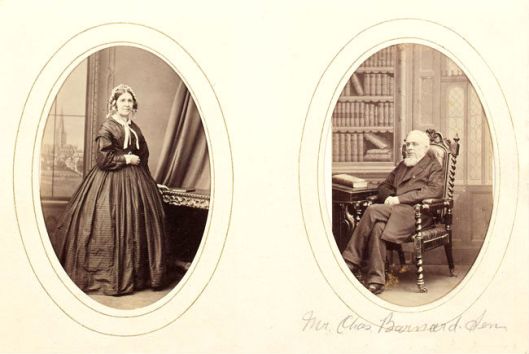 The managing director James Bower played a direct part in the running of the company, rebuilding and re-designing the wire netting machines. In 1921 they purchased part of the old Mousehold Aerodrome where, in the Second World War, they manufactured gun shells and parts for the Hurricane fighter. This attracted the attention of the Luftwaffe who bombed the site in July 1942, killing two people [6].

The Norwich engineering firm, Boulton and Paul, made aircraft (including the Overstrand and Sidestrand) but who knew that Barnards helped make planes? Barnards also made buses …

Bus made by Barnards Ltd in Cathedral Close.  Image courtesy of Norfolk Record Office via http://www.picture.norfolk.gov.uk

… and at their factory in Salhouse Road they produced steam traction engines.

Thanks to Hannah Henderson of The Museum of Norwich for kindly showing me the Barnards collection, and I also thank David Holgate-Carruthers for his help. Do visit the Museum of Norwich, which has a section devoted to Barnards and Jeckyll and gives a fascinating glimpse into Norwich as it once was. I am grateful to Clare Everitt of Picture Norfolk for allowing me to reproduce photographs. Clare manages (https://norfolk.spydus.co.uk/cgi-bin/spydus.exe/MSGTRN/PICNOR/HOME), which contains a searchable collection of 20,000 images of Norfolk life.