In the previous post on churches [1] I mentioned the saying that Norwich had ‘a church for every Sunday‘, tactfully stopping short of saying, ‘and a pub for every day of the year‘. But, as we saw for churches, not every pub managed to stay open for they were subject to the same Darwinian struggle we see in the history of Bullards’ Brewery.

Calculating the number of Norwich’s pubs is not an exact science since the definition of a pub varies. In 1681 a Dean of Norwich Cathedral complained that “the town swarms with alehouses” at a time when there were about 250 [2]. By the early C19 there was indeed a pub for every day of the year, with about 378, plus 30 to 40 beer-houses that were licensed to brew beer. By 1878 Ratcliffe’s Drink Map listed 655 licensed houses (including refreshment houses and beer houses) but, with various licensing acts designed to curb drunkenness, the number continued to decline throughout the C20. The 1892 Drink Map by the Norwich and Norfolk Gospel Temperance Union gives an idea of the density of licensed premises at its peak.

In 1837 Richard Bullard and James Watt entered a short-lasting partnership to start the Anchor Brewery at St Miles Bridge in Coslany – forming a major part of industrial Norwich. It was just over the water from Barnard Bishop and Barnards’ Norfolk Iron Works.

[Incidentally, this is the same lettering that Panks Engineering used on their Victorian cast-iron showroom in Rose Lane and now in Heigham Street].

Bullards’ chimney, with its conspicuous lettering, was an inescapable feature of the city’s industrial landscape.

The brewery was well-situated, drawing high quality water from a deep artesian well and receiving grain and hops by wherry along the River Wensum. The large fermentation hall survives as Anchor Quay apartments.

Bullards’ fermentation hall in 1973, at the junction of Westwick and Coslany Streets. http://www.georgeplunkett.co.uk

However, proximity to the river meant that the brewery did not escape the 1912 floods.

The Anchor Brewery in the 1912 floods. Courtesy of Picture Norfolk (www.picture.norfolk.gov.uk)

The company was to employ several hundred workers to supply the company’s ca 500 pubs [3]. The Unthank Arms in Bury Street, near the Heigham home of the Unthank family [4], was one of Bullards’ pubs …

… as was The Barn Tavern at the foot of Grapes’Hill, built for Bullards’ by RG Carter [see 5 for Arts and Crafts pubs].

The Barn at St Benedict’s Gates, from a 1958 trade calendar by the builders RG Carter (Courtesy RG Carter Archive)

Bullards’ tipsy anchor in the gable end of The Barn Tavern

I make no apologies for revisiting The Arcade Stores, which was originally a Bullards’ pub selling beer, wines and spirits [6]. It was at the left-hand entrance (castle end) of George Skipper’s Royal Arcade, with which it was integrated by WJ Neatby’s magnificent Doulton tiles. Art Nouveau buildings in this country are scarce: Nikolaus Pevsner only reckoned Norwich’s Royal Arcade and Edward Everard’s  printing works in Bristol. The Arcade is therefore of national importance so it is hard to comprehend why the ground floor of the pub, with its Doulton tiles, was allowed to be remodelled in the 1960s to make way for a plate-glass-fronted butcher’s shop.

… which at one time contained Bullards’ Orford Arms, now occupied by Nando’s. Beneath the pub was the Orford Cellar where Jimi Hendrix and David Bowie played in the 1960s. 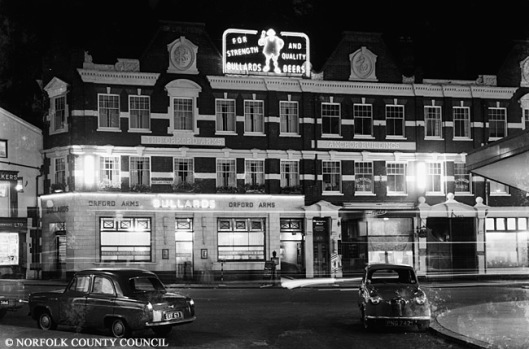 Two of the pediments on Anchor Buildings contain the initials BS for Bullard and Sons; the central pediment contains the brewery’s tilting anchor emblem. This strangely prescient version of ‘anchor on the rocks’ was a variation of the Bullards’ emblem used from 1869 [8]. The later version from The Barn (above) is simpler, has no rocks and tilts in the opposite direction.

Although not far from the Anchor Brewery, the upright anchor below seems to have nothing to do with Bullards’. Instead, architect Edward Boardman appears to have placed this cartouche over Water Lane that passed through Howlett and White’s shoe factory (later Norvic) on Colegate, down to the River Wensum. The lane did, however, go down to a staithe opposite the Anchor Brewery.

After Richard Bullard died in 1864 the brewery was renamed Bullard and Sons, continuing under the management of Richard’s sons Harry, Charley and Fred. Harry was a well-known figure in the city; he was sheriff, justice of the peace, three times mayor and knighted by Queen Victoria in 1886 [10]. 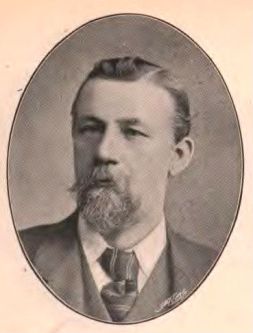 The amalgamation of the remaining Norwich breweries began in the 1950s when Bullards took over Youngs Crawshay and Youngs in King Street. In 1961, competitors Morgans went into voluntary liquidation and the chairmen of Bullards and Steward & Pattesons – not wanting the brewery itself – reportedly drew cards to decide who would take which of the 400-plus tied houses [12]. Morgans’ Brewery was sold to Watney Mann on the understanding that Watney’s keg beers would be sold in Bullards’ and Steward & Patteson’s pubs. This was when the Bullards’ enterprise finally hit the rocks for Watney’s filtered, pasteurised and carbonated keg beers were soon outselling the traditional beers drawn on long-handled pumps [13]. 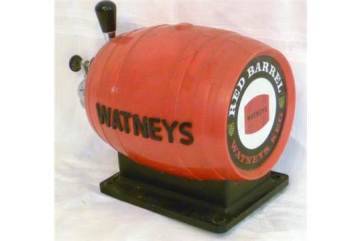 In 1982, Bullards’ chimney – so long a landmark of the city’s industrial quarter – was demolished.

Postscript The name ‘Bullards’ is undergoing a revival, for cask beers bearing their name are being produced in collaboration with local brewers Redwell [14]. In addition, Bullards’ Gin, which is now being distilled in The Ten Bells on St Benedict’s Street, has been voted Best London Dry Gin in the World [15]. On your behalf I bought some and tasted it. It was good and, as promised by Kingsley Amis’ slogan, ‘Makes You Drunk’.

For a really fascinating account of Norwich pubs and breweries see Frances and Michael Holmes’ Norwich Pubs and Breweries: Past and Present (2011) http://www.norfolkpubs.co.uk/publications/books6.htm

Thanks to Clare Everitt of Picture Norfolk for permission to reproduce images from this wonderful archive. I am grateful to the archivist of RG Carter for her assistance.