In the previous post I covered Kent and Stephenson’s [1] selection of twenty Tudor-to-Georgian doorways still standing after the war (1948). In walking around Norwich I photographed many more doorways; here is my own selection of twenty (plus one from Great Yarmouth).

In 1871 Thomas Jeckyll, a leading light in the Japanese-influenced Aesthetic Movement, designed an extension for High House, Thorpe St Andrew. The brackets supporting the canopy were carved in a loose Jacobean Revival style [2] but perhaps of greater interest to Jeckyllites are the terracotta panels above the door – probably of Cosseyware from Gunton’s Brickyard in nearby Costessey (covered in a recent post).  The rectangular panel contains the initials of client Thomas Birkbeck while Jeckyll’s own initials are transformed in a Chinese-inspired roundel to the right. 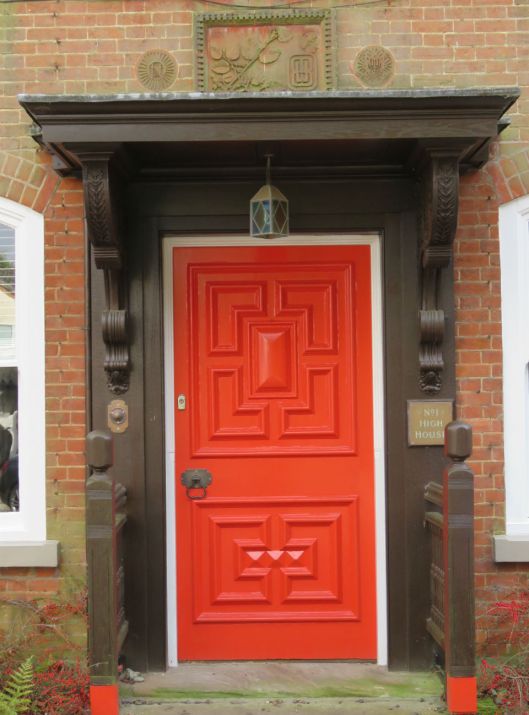 This house below was designed in Queen Anne Revival style around the turn of the C19th/20th.  Like other Arts and Crafts houses in the city built in the QAR style this house has characteristic smaller panes at the tops of the windows. However, this house is distinguished by the quality of its doorway with hooded canopy carried on carved brackets and slim columns.

Until recently, the magnificent shop front in Upper St Giles belonged to an unmodernised chemist’s. It dwarfs the small Georgian-style doorway to the side whose mystery is enhanced by the purple paintwork  (Purpleheart 188 by Little Greene).

The frontage for the Salvation Army on St Giles Street may appear to be hewn from granite but in reality is composed of Coade Stone – a weather-proof ceramic invented by Eleanor Coade (b 1733). The rusticated appearance is produced by cut-back joints and the worm-like tracks on the vermiculated surface (vermiculi = little worms; vermicelli = tastes like little worms). The head on the keystone is thought to be “classically-inspired”; suggestions include Bacchus or perhaps a Greek philosopher.

The frontage of the Citadel was originally built in 1892 as Mortimer’s Hotel. Around 1900 it was known as the Opera House Hotel probably because it was used by performers from the Grand Opera House opposite (now the site of St Giles car park).

34-36 St Giles Street, Norwich (c) George Plunkett Archive. Photographed 1969. The gates beneath the white-painted single bay to the left were the entrance to their Citadel before the Salvation Army also bought the five-bayed Mortimer’s Hotel .

Princes Street is full of gems. At first glance Numbers 16 and 18 appear to be identical twins but 18 is slimmer. The alternating blocks on the architrave to the sides of the doors, and the blockiness of the wedge-shaped voussoirs and keystone above, are typical of the so-called Gibbs surround.

This fine, painted house is at the bottom of Cow Hill at the junction with Pottergate. The Georgian doorway, with its simple triangular pediment supported on scrolled brackets, is – in Norfolk dialect – seriously ‘on the huh‘. Of course, this is part of its considerable charm. 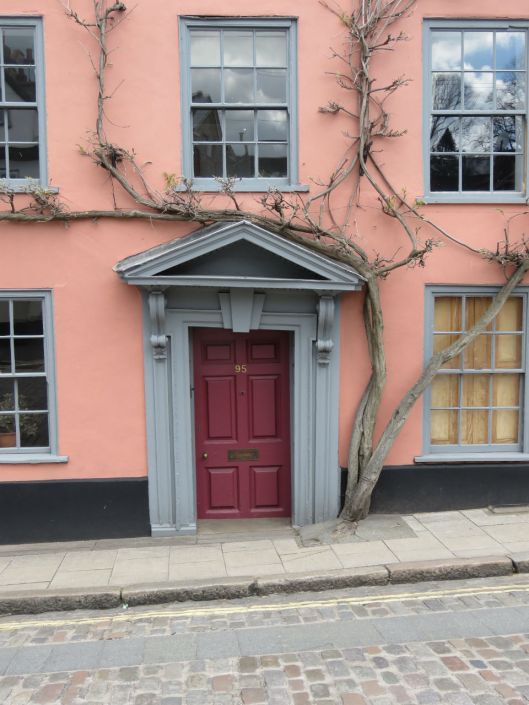 Number 168 King Street is part of a row of C17 houses that formerly contained the Ship Inn. Above the partly blocked alleyway is a lintel on which is carved ‘Princes In’. It is thought this was re-cycled from the inn of that name that once stood in Princes Street, off Tombland. 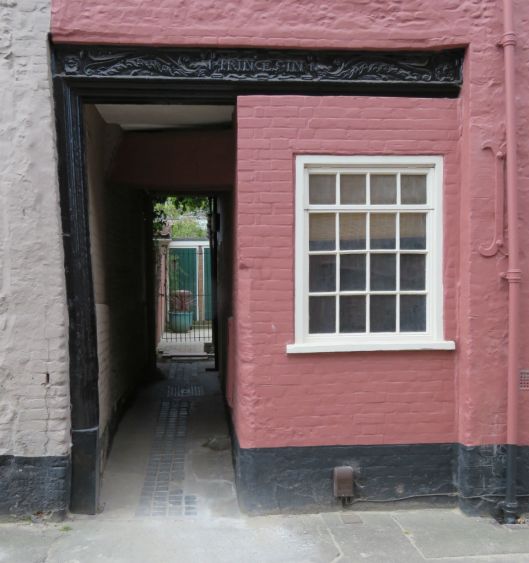 The building below was once the home of John Harvey who, over the late 18th/early 19th centuries, became Sheriff, Mayor and High Sheriff. Norwich was famed for its shawl weaving, which is said to have been introduced to the city by Harvey in 1791. The rear of the building has a fine central bay whose three floors are rhythmically related. The ‘blind’ arch of the three-part Venetian door on the ground floor is mirrored in the Venetian window above (where the arched central light is typically the taller of three), and is topped by the semi-circular Diocletian window on the third floor. 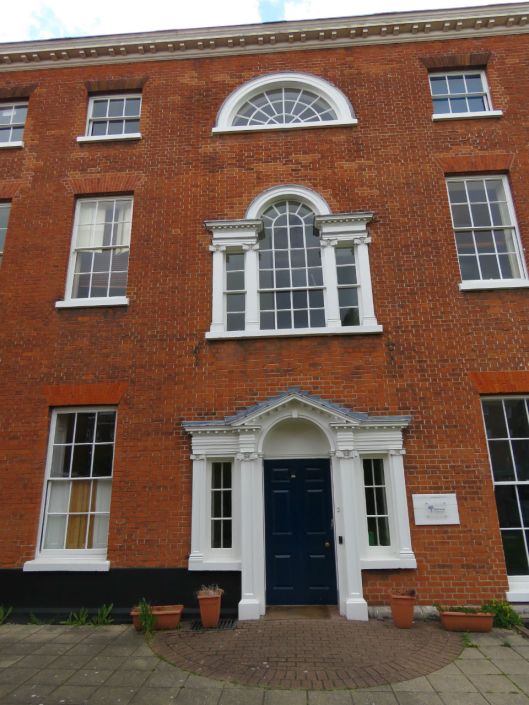 The rear doorway of Gladstone House (above) is – with the exception of the Venetian lights – relatively plain, with scrolled Ionic capitals supporting an open pediment. The Georgian front door, opening onto St Giles Street, is more imposing (below). The open base of the triangular pediment allows the intrusion of a nine-petalled fanlight of identical design to the one illustrated in the previous post for Thomas Ivory’s 13 All Saints’ Green. The break in the base of the open pediment leaves two floating parts to the cornice, which are carried on consoles; these console cornices are, in turn, supported by two fluted and banded columns, the whole being more decorative than the door to the rear. 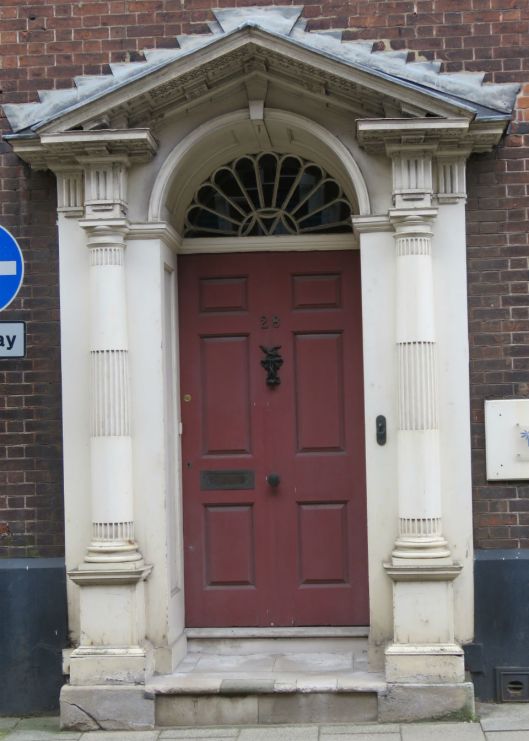 13 All Saints’ Green. Identical to the fanlight on Gladstone House

In about 1330, John Page built a hall house in King Street; one hundred years later the wool merchant Robert Toppes remodelled it to make the entire first floor his trading hall [3]. Then it was known as Splytts, now we know it as Dragon Hall. Toppes became a man of influence in the city. To ensure his spiritual wellbeing, or perhaps to celebrate his status as mayor and member of parliament, Toppes sponsored the stained glass ‘Toppes Window’ in the east end of St Peter Mancroft. My first post showed Toppes and female members of his family depicted in the donor panel of this medieval masterpiece. Part of Toppes’ C15th remodelling of Page’s house involved adding an “expensive stone surround” to the C14th ogee doorway [3], explaining the ‘door-within-a-door’ below.

The fanlight at 25 St George’s Street is a reminder of times when the word ‘cosie’ could be used unironically. The lettering, sentiment and use of stained glass suggest a date in the early part of the C20th. 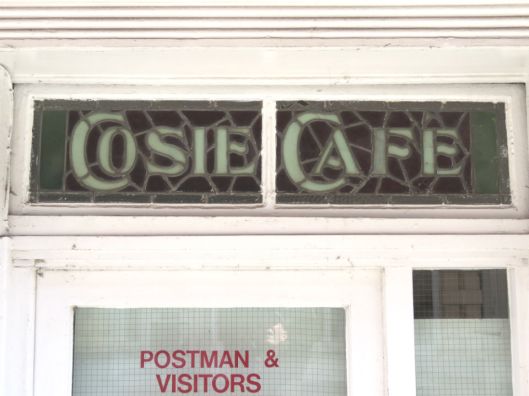 Jenny Lind (‘The Swedish Nightingale’) was enormously popular in the mid C19th. The profits from three concerts she gave in Norwich helped provide for an infirmary for sick children. The original playground in Pottergate was bombed in the Second World War while children were in the bomb shelter yards away. In 1972 the 70-year-old gate was moved to a new playground in Union Street near the Norfolk and Norwich Hospital. The owner  of the nearby Littlehaven Coffee Co remembers being one of a line of children recovering in bed after having their adenoids taken out in the Jenny Lind Wing. But the re-siting of the hospital from Newmarket Road to Colney in 2001 left the gateway marooned.  Still, it is a fine monument. The classically-influenced stone arch is decorated with blue and green mosaic; the Art Nouveau gates, complete with ‘spade’ cut-outs, were made by Boulton and Paul of Norwich – another target of German bombs. 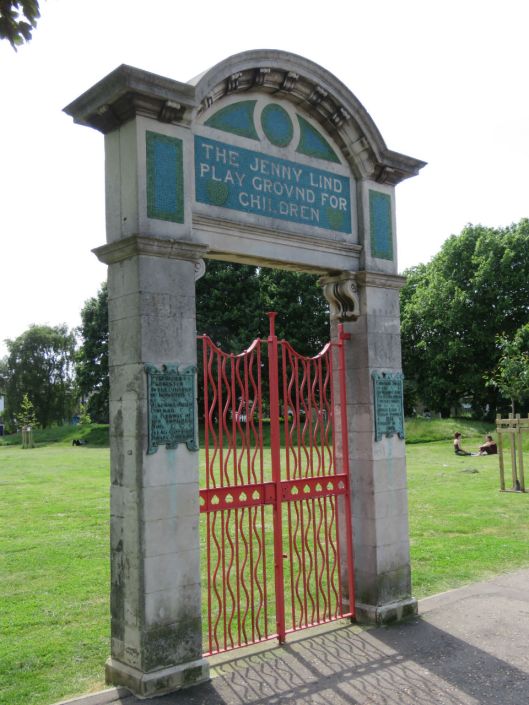 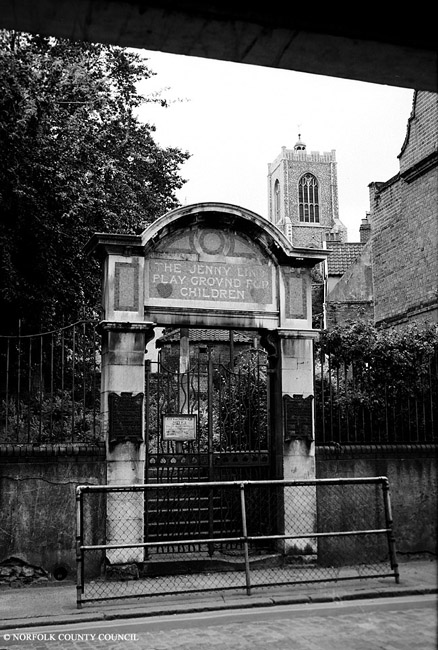 Another commemorative arch is at the entrance to the James Stuart Garden at Recorder Road/St Faith’s Lane, off the bottom of Prince of Wales Road. The gardens were laid out by the Norwich architect Edward Boardman in 1922 in memory of James Stuart, Privy Councillor, of Carrow Abbey (d 1913). It would have been built sooner but for the First World War.  The coat of arms on the fascia of the memorial gate is that of the Stewart clan; the Scottish connection is underlined by the thistle in the left-hand spandrel, echoed by the English rose on the opposite side. The renaissance style and use of botanical swags suggests this to be a late example of the English Domestic Revival style.

Politics aside, this is one of my favourite doorways, not for the door itself – which is unexceptional – but for the Art Nouveau surround which elides into the magnificent Royal Arcade around the corner, designed by George Skipper. The Parian Ware tiles were designed by W J Neatby at Doulton’s Lambeth Pottery. 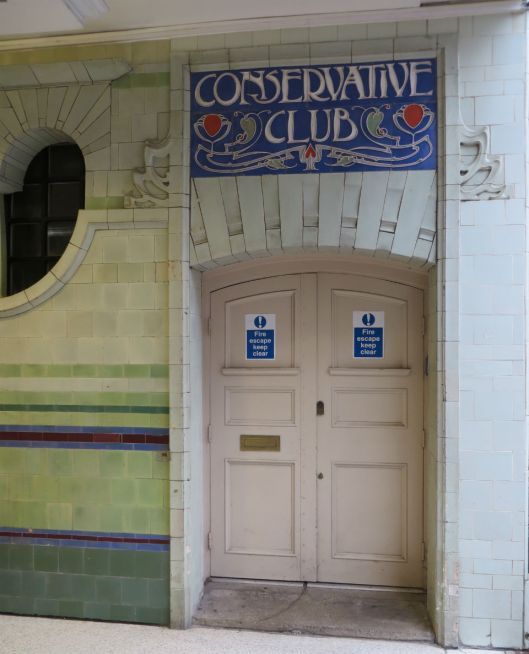 Despite stumbling around Norwich for many years I had never come across Crown Road, behind the Agricultural Hall, off Market Avenue. The proximity to the former major cereal trading house seems to account for the name – Cereal House – emblazoned on the door itself and, hammering home the point, the sculpture of three wheat-sheaves above the door. This sculpture, apparently cast in bronze, is notable but appears at the expense of the heavily-carved Georgian doorcase that was still present in the 1960s (see further below). 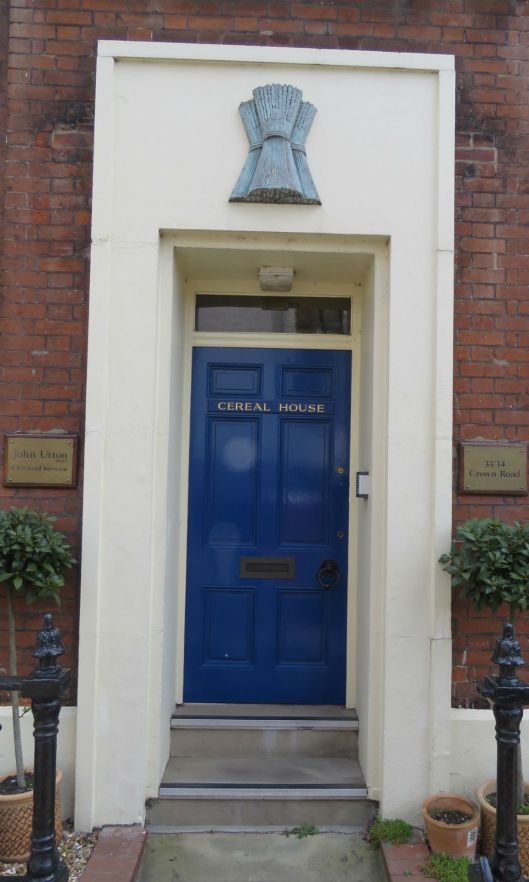 Number 2 Cathedral Close was built by Thornagh Gurdon who wrote a history of Norwich Castle. The house is set inside the cathedral precincts on Almary Green. The ‘Mary’ part of this name could be misleading since it is a corruption of Almonry Green, a reference to the place where the almoner once doled out bread and alms. The entrance to this mid-C18th house is imposing since you have to ascend the stone staircase required to rise above the basement. Given the size of the doorway overall the scrolled Ionic columns are rather slim, set against a rusticated surround. According to Pevsner and Wilson [4] the rounded segmental pediment is “a rarity in Norwich”. (‘Segmental’ in this context means based on a segment of a circle). 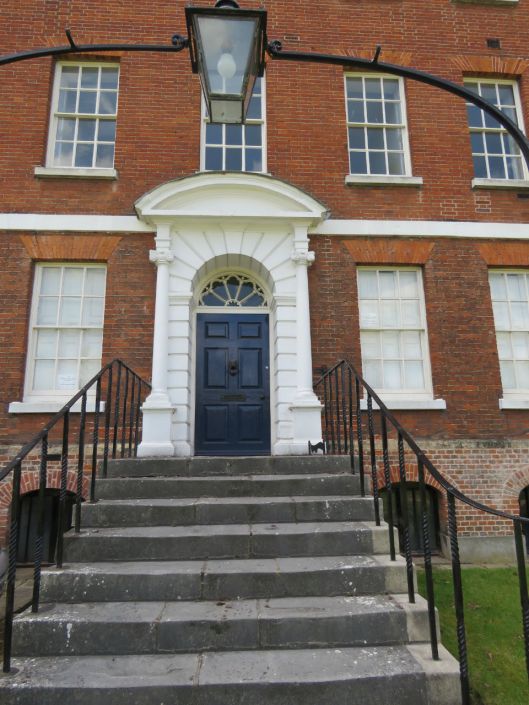 Numbers 2 and 3 Cow Hill were built in the late C17th as a single range beneath six gables [4]. The architectural detailing and decoration are unified, except for the key  features of the front elevation – the doors. The differences in door style are relatively minor (e.g., one has fluted columns, the other fluted pilasters) but it is the size of No 3’s doorway that stands out. Yes, it is further down the hill, requiring extra steps up to the threshold but then the doorway shoots up beyond its neighbour so that the triangular pediment breaches the string course.  From the base of the first step to the apex of the pediment the door is less than half the total height. 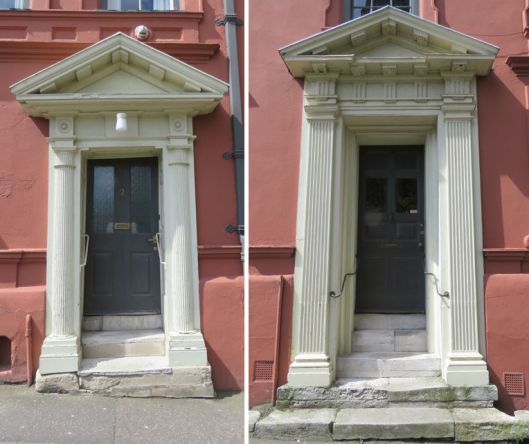 Samson and Hercules House in Tombland is thought to have been built in 1657 [4] on the site of an earlier building made for Sir John Fastolf (the presumed inspiration for Shakespeare’s Falstaff).  The Georgian-style porch is supported by the two heroes, Samson (left) and Hercules (right). Samson holds the jawbone of an ass in one hand and in the other a small animal, which looks like a lamb or a kid although closer inspection reveals a bushy tail that could not have belonged to either. The animal is a fox and alludes to the biblical story that Samson caught 300 foxes (probably jackals) and tied their tails together in pairs so that they could trail a burning torch between them (Judges 15:4). Those of us concerned about advertising a lobster restaurant by painting historical figures lobster red can extract some consolation from knowing that the figures are replicas – the original C17th figures having been replaced in 1999. Even so …

Showing one Falstaffian house provides the excuse for showing another – a favourite of mine. In a previous blog I mentioned Fastolff House in Great Yarmouth, a striking art nouveau building designed by the local architect ‘Concrete’ Cockrill. The patina’ed bronze door does look like the entrance to a mausoleum.

Norwich is so rich in historic buildings that I could have selected many other ancient doorways. Most are prized and well-maintained but a significant number are unloved. For example, 41 All Saints’ Green is a large five-bayed merchant’s house built in the late C18th [4]. In 2010 the Norwich Evening News reported that this building had been empty for some time since last used as a dental practice. It is still empty and the fine Doric doorcase is showing signs of neglect. In 2016 the building appears on the Norwich City Council’s Heritage at Risk Register.  The Norwich Preservation Trust, who have a fine record of intervention in such cases, is also keeping a watchful eye.

Number 33 Bethel Street has one of the city’s finest Georgian doorways with an impressive Doric entablature containing martial arms on the frieze. Unfortunately, there appear to be no plans to restore this building, which is described on the council’s at-risk register as “Poor condition. Long-term vacant building”. Shame!